Tom Herpich
Jesse Moynihan
"You Made Me" is the twentieth episode in the fourth season of Adventure Time. It's the ninety-eighth episode overall.

Princess Bubblegum tries to find a way to help the Earl of Lemongrab after he begins to annoy her people with his disturbing ways.

The episode begins with Finn hooked up to Princess Bubblegum's new Aura Visualizer machine, using it to look at Crunchy's aura. Finn tells Princess Bubblegum that he wants to see Peppermint Butler's aura next, which causes Peppermint to hastily tell them "Heh, heh... you don't want to see that." Jake complains that he is tired, so he and Finn start to leave. On their way out, they see two Banana Guards in a room supervising the castle's cameras. After making Finn and Jake promise to keep it their "weird secret," the guards hesitantly point out a screen. At first Finn and Jake cannot see what they are talking about until the Banana Guards zoom in, and they catch the creepy, disturbing sight of Lemongrab stalking Chocoberry, watching her sleep in her bedroom. Soon a bunch of Candy People, including Princess Bubblegum, are in the security room watching Lemongrab. Princess Bubblegum finds Lemongrab to ask him what's wrong. Lemongrab tells her that Castle Lemongrab currently has no citizens and complains that he is the earl of nothing. saying that he is the earl of nothing. He then slips out of the window and runs away, tearing off his clothes and yelling "You made me! You're my Glob!" Princess Bubblegum can only watch him sympathetically and sighs from the window above him. 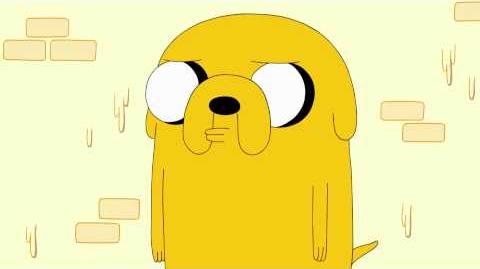 Adventure Time - You Made Me (long preview)
Long Preview 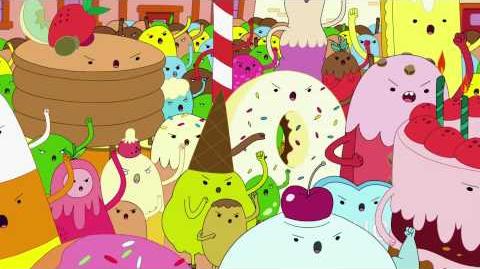 Adventure Time - You Made Me (short preview)
Short Preview

Adventure Time - You Made Me (Preview) Clip 1
Sneak Peek 1

Adventure Time - You Made Me (Preview) Clip 2
Sneak Peek 2

Shots from the Long Preview displaying the varying expressions of Lemongrab

Earl of Lemongrab in the dark, watching Chocoberry 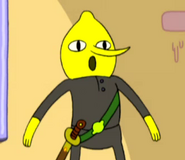 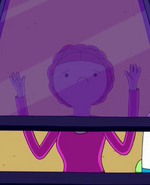 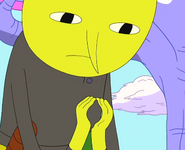 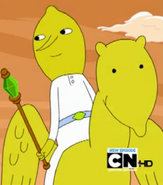