Glory Curda
Y5 (formerly known as Y4) is a character who appears in the Adventure Time: Distant Lands episode "BMO." She is a teen scientist rabbit living on a failing space station called The Drift.

Y5 appears to be an anthropomorphic humanoid rabbit of a greyish complexion. Her eyes are rather unique, being white circles with a black outline on the upper half, but no outline on the lower half. She is usually seen wearing a yellow crop top shirt, but in one shot she is seen wearing a white sweatshirt. She wears black leggings, and green boots flaring out into darker green towards the edges. She is also seen wearing a beige lash tab.

She is said to watch others from afar in their antics as a method of socializing, even with newcomers, such as the dubbed “hero”, BMO. However by the end of “BMO” she is more confident and taking charge on how to save her community in the wake of Hugo’s scheme. 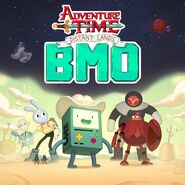 Retrieved from "https://adventuretime.fandom.com/wiki/Y5?oldid=840156"
Community content is available under CC-BY-SA unless otherwise noted.