Davey Johnson
Xergiok was once a goblin king who was a jerk to the citizens of his kingdom. He always spanks them for his own pleasure and treats them like slaves, which lead to them to become more subservient and filled with fear. Finn and Jake defeat Xergiok, driving him out of his kingdom. Later, he returns to take back his kingdom with an army of Earclops, but is defeated again when Finn and Jake defeat his soldiers with loud sounds and one falls on him. He escapes and fires fireballs at Finn and Jake, but one of his own fireballs hits him, knocking him out. Finn picked up his magic wand and ate it. Xergiok was not killed; after his defeat, he fled.[1]

After his defeat, Xergiok made a wizard mad and lost his eyes (unbeknownst to him, they actually just got stuck in his beard). This caused him to have an epiphany and he devoted his life to helping others, particularly a flock of giant birds he found. When he met Finn and Jake again they told him his eyes were in his beard, and after restoring his sight, he turned back to his old ways and tried to take over the Goblin Kingdom and lost his bird friends in the process. Remorseful, Xergiok removed his eyes again and walked into a lake, where he met a lonely mermaid and started a relationship with her.

He has light-green skin, a deformed head, pink colored eyes, pointy ears with piercings, and, making the main difference between him and the rest of the goblins, a nose upwards with three points. He also appears to be physically strong, due his large chest and bulky legs, but his arms are very thin, compared with the rest of the body. As king, he wears a gold tiara crown with three red leaves, better clothes (compared with the rest of the goblins), and a lot of diamond decorations over the body, including ears, arms and teeth.

After being banished and losing his eyes, he grows a beard and his clothes become more ragged and the piercing on his ears are gone, leaving holes where they used to be. He also wears glasses to cover up his empty eye sockets.

Xergiok had a magic wand that allows him to shoot fireballs, fly, and teleport himself by crossing his arms. After his banishment and loss of his eyes, Xergiok gained psychic abilities and the ability to swap his body parts with those of others. 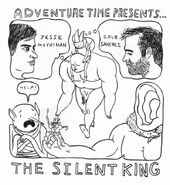