X is the Fire Elemental 1000 years in the future. For some unknown reason, X uses their tank to shoot at O, the Slime Elemental, in the intro sequence for "Come Along With Me".

X has a ball of fire, giving off an ember effect, for a head, and on their face is a big, white X. However, their hands are not made of fire. They wear dark, round sunglasses that appear to be separated by the X on their face. X also wears a maroon suit of armor along with a cape.

Since X is the Fire Elemental, they have the ability to control fire at will. They also know how to control a tank. 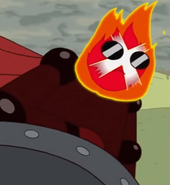 Retrieved from "https://adventuretime.fandom.com/wiki/X?oldid=791696"
Community content is available under CC-BY-SA unless otherwise noted.