Andy Daly
Wyatt is one of Tree Trunks' ex-husbands who attends her wedding in the episode "Apple Wedding." Princess Bubblegum keeps him 100 feet apart from Tree Trunks' other ex-husbands, Randy and Danny, to avoid any altercations. He sits at the bar for most of the episode, drinking apple cider and talking to BMO. He is later imprisoned with the other wedding guests in the Candy Dungeon, where he winds up making out with Tree Trunks' mother.

He tells BMO that he taught Tree Trunks how to play tennis and that she called him a baby when she beat him in a match. He says Tree Trunks left him because she thought he was "stifling her spirit." During the wedding ceremony, Wyatt asks BMO to live with him.

In "Joshua and Margaret Investigations," Wyatt appears in a flashback when it is revealed he has been stealing Tree Trunks' apple pies and wearing tennis rackets on his feet to make it look like the Shape-shifter took them. When asked by a baffled Tree Trunks why he did not just ask for seconds, Wyatt breaks down in tears, saying he wants thirds and fourths, and does not want to ask for Tree Trunks' pies, as they are the best part of his day. His behavior in this flashback likely contributed to their divorce.

In "Ring of Fire" it is revealed that Wyatt met Tree Trunks while working as her secretary for her shipping company. They eventually fell in love, and unlike her previous husbands, Randy and Danny, Wyatt and Tree Trunks took time to know each other. They had a large wedding, and were married for a long time. However, due to irreconcilable differences, Tree Trunks and Wyatt eventually divorced.

He resembles an elephant seal. He wears glasses and a purple jacket over a peach-colored shirt with a brown tie. 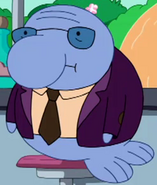 "Fire Wyatt still in the game!"

Candy Wyatt
Add a photo to this gallery
Retrieved from "https://adventuretime.fandom.com/wiki/Wyatt?oldid=831856"
Community content is available under CC-BY-SA unless otherwise noted.