Jesse Moynihan
Thomas Wellmann
"Wizards Only, Fools" is the twenty-sixth episode in the fifth season of Adventure Time. It's the one hundred and thirtieth episode overall.

Starchy asks the scientifically-minded Princess Bubblegum to use magic to cure him of his sickness, so they have to get him a magical cure from Wizard City.

In the Candy Kingdom hospital, Princess Bubblegum tries to heal Starchie of a cold with a serum, but Starchie is unwilling to be healed unless by means of magic. Princess Bubblegum asks Nurse Pound Cake to hold him down, but the nurse declines because she says her uncle, a magic worker, once cured her of her sadness. Exasperated, Princess Bubblegum then explains that magic is just science "presented like mystical hoodoo." She proceeds to mock magic, which causes Nurse Pound Cake and Starchie to be offended. She relents, seeing how upset they are, and promises that she will go to Wizard City to get a cold spell. She walks out into the hallway where Finn and Jake are waiting, and after explaining the situation to them, they are bummed out because Starchie's graveyard secrets workshop would be canceled. However, they seem to agree magic would work, but say trespassers would get killed in Wizard City. Princess Bubblegum employs the help of Finn and Jake, telling them to dress like wizards and meet her at the entrance of the city.

Finn and Jake stand facing a tall wall of rock, and Jake confirms from a map that this is the entrance. Jake stretches upward to look over the wall, but says there's nothing but "more mountains." Finn tries to trick the wall by pretending to give up and walk away, but when he turns back around and runs at the wall he just hits his head. Princess Bubblegum walks toward them saying she got the password from the Ice King, and holds up a tape recorder, explaining that the wall can only be unlocked by the voice of a wizard. She plays the tape, and they all listen awkwardly as Princess Bubblegum yells at Ice King for the password, even hurting him in some way until he surrenders. He says the password is "Wizards Rule," and at these words the rock wall disappears, revealing Wizard City. Finn is astounded by the "magic," but Princess Bubblegum is unimpressed, saying it is just "a vocal registry rigged to a vibration modulator" and that they can get through because "the density is all wobbled." Jake says "boo" and stretches into a five-pointed shape, asking how she could explain his ability, but she offhandedly calls it a "mutation."

While in Wizard City, the group comes across what they guess must be the Wizard City police interrogating a man who allegedly impersonated a wizard and purchased magic items from the store they are all standing just outside of. The police pull up their blindfold-hats, unmasking beams of golden light that hit the man and transform him into a hollow stick as a sentence for his crimes.

Finn, Jake, and Princess Bubblegum hurriedly rush into Ron James' Spell Palace and order a cold spell. The man behind the counter presents a crystal bottle. Bubblegum asks how the spell works, to which the man behind the counter responds, "it works by magic. It's a spell." Bubblegum is hesitant to buy it without any information, and starts arguing with the man, demanding what the contents are made out of. He then screams "YA'LL IS FAKES! and presses a red button behind his counter that calls the police. An alarm bell sounds as the police crash through the shop's window using the wooden sticks they carry, and Princess Bubblegum grabs the cold spell and escapes out another window, followed by Finn and Jake. She runs over rooftops and through the city, but cannot seem to lose the police, who run through a crowd, pushing down wizards left and right. Finn asks Jake if Princess Bubblegum is naked, due to the way her wizard costume looks, but Jake tells him not to make him feel "any more awkward."

They come to a dead end, but Abracadaniel comes out of a door that appears in the wall, carrying out what seems to be bags of trash. Despite his weak protests, Finn forces Abracadaniel and the others into the door, and it closes quietly before the police can get them.

In his palace, the Grand Master Wizard speaks to the group atop a giant bubble, and expresses his disappointment with Princess Bubblegum and Abracadaniel. However, he says that they can go if she says "wizards rule." She refuses, due to her belief that magic is just science, and gets all four of them locked in wizard jail. During breakfast the next morning, Abracadaniel challenges Princess Bubblegum to an "honorable prison stabbing to the death." Princess Bubblegum defeats Abracadaniel, but refuses to kill him. Finn throws Princess Bubblegum the cold spell, which is really just a spell that releases cold air, instead of a cure for sickness.

Back at the hospital, Abracadaniel pretends to use healing magic on Starchie. As he is distracted by the magic, Finn holds him down as Princess Bubblegum injects Starchie with the green healing serum from the beginning, ending the episode.

Starchy is sick with a cold.

Starchy refusing to be injected with the serum

Finn describing how they cannot go to Wizard City. "Wizards only, fools!"

All Seeing Eye on Finn

Jake disguised as a wizard

Princess Bubblegum with the recording of Ice King

Finn listening to the awkward dialogue on the tape recorder

Jake listening to the awkward dialogue on the tape recorder

Police interrogating Stranson Doughblow because he was impersonating a wizard

Inside the wizard shop

Ron unleashing a spell from its bottle

Ron asking Finn, Jake, and Princess Bubblegum what they need from his store

"What's the magic made out of, ding-dong?"

Ice King sneaking into secret wizard group by being invisible

Bufo, the Forest Wizard, and the Laser Wizard

Finn, Jake, and Princess Bubblegum prepared to fight the police

Princess Bubblegum demanding to speak with the Grand Master Wizard

Jake, Finn, and Abracadaniel waiting for Bubblegum to say "wizards rule" so they can leave 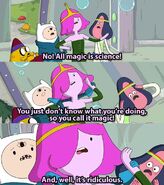 Abracadaniel worrying about being in prison

Criminal throwing underwear at Finn (which later traumatizes him)

Finn resting in his cell with Jake looking over him

Princess Bubblegum sleeping in her cell

Princess Bubblegum being tripped by Abracadaniel 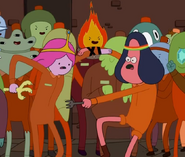 The flame prisoner that appeared in the episode.

Princess Bubblegum with the cold spell in the prison cafeteria

Abracadaniel pretending to use magic to heal Starchy

Finn holding down Starchie so Princess Bubblegum can inject the serum