Ghostshrimp
Wizard Thief is a character who appears in the episode "City of Thieves." He is one of many people to handle Penny's flower basket before a Cyclops robs him. He also magically removes and steals the Two Headed Thief's left head.

His appearance is identical to Forest Wizard except his coloration; he is a palette swap. His robe is red while Forest Wizard's is green and his skin is a light purple while the Forest Wizard's is brown. He has a long off-white beard and a tall, pointy hat to match his robe. When in cat form, his fur is black.

He is able to cast swirly pink spells (with an unknown effect) from a Y-shaped twig, and can turn into a cat by chanting "Pancake, pancake, pancake." 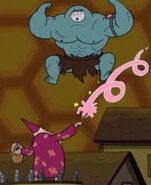