The Wizard Students first appear in the episode "Wizard" They train to become master magicians under Bufo. They are mostly low-ranking wizards, with few stars on their Wizard robes. Some students later appear fighting in "Wizard Battle" for a kiss from Princess Bubblegum. One also appears as a Little Person in "All the Little People" and they make a cameo in "Wizards Only, Fools."

The students are all similar-looking humanoids that wear the same wizard robes. One student in particular has a PHIL FACE, and another is drawn to look like Adam Muto in "Wizard Battle." One also appears to be a humanoid cat. 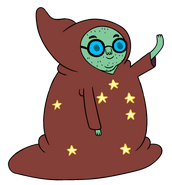 Cameo in "Wizards Only, Fools"