Finn and Jake take up wizard lessons in order to gain free magic powers, but are ultimately tricked into stopping an asteroid.

Finn and Jake are walking in a grassy plain, discussing about what a Demon heart looks and tastes like, when Reaper offers free magic powers for them. Finn hastily agrees, but Jake is a little more cautious about it, and tells him to haggle with the Reaper. Following suit, Finn does this and accepts the offer when Reaper throws in a keychain in the deal (which he is not seen receiving). The boys go through a portal to a wizard training facility. There they meet a wizard frog who directs him to Bufo. The explanation did not make any sense and Jake threatens to beat him up. The frog croaks and reveals several tadpoles inside who are all Bufo. After his demonstration of magic, he brings them inside, and reveals to them Wizard Students training. Bufo gives Finn and Jake wizard cloaks, which Finn stuffs the bottom of it into his pants after proclaiming it as being "a dress."

Bufo gives the boys their first challenge, gaining Dustomancy. It consists eating an entire broom. Jake has no problem with it, since he can grow big and eat it, while Finn takes some time. They both get a star on their wizard cloak after accomplishing it. Finn tries casting Dustomancy, but nothing came out of his hands. He accuses Bufo of tricking him, but Bufo then points out that "Dustomancy," is always in motion. He has the power to control dust motes and even interact with them. Finn and Jake get excited. Bufo then gives the two their second challenge, which is gaining Shadowcery. Bufo puts blindfolds on Finn and Jake and instructs them to grab "eyeballs" (peeled grapes, according to Jake) in a bowl. They both get another star upon succeeding. Finn then tries it out by making a horse out of his own shadow and attempts to jump on it. He goes right through it and the horse says "No touchies," and disappears. Finn gets even more excited and determines to get all the stars.

The boys go through many more levels and gain more powers until they are only missing the final star. Finn is eager to get the last star, but Jake is content without it. He implies the best spell is sleep and uses it on himself. Finn then decides to get the final star by himself. Bufo says the last power is not free and that he must do the "Pledge of Ultimate Responsibility" to get it. Finn quickly agrees, but Bufo tries to caution him that he should not take it. But Finn still wants to take the pledge. Bufo finally gives up on warning him and tells him to grasp his hand. Finn does so, then blacks out in a flash of light. When he wakes up, he realizes he is being pulled upward by ropes and realizes he has his big star. He is in place in front of an orb along with the Old Wizards. Bufo then says that Finn has to use his magic to push a meteor away from the wizard school that has been approaching it for 847 years, asking Finn to add his powers to the orb. Then he dismisses Jeremy, the oldest of the three Old Wizards, whose place Finn will take for the rest of his life before leaving. Finn then gets an idea so that the wizards will not have to be stuck like this for the rest of their lives. He jumps down from the ropes and runs outside, where Bufo is getting ready to put Jeremy in his grave. He tells Finn he is crazy, and Finn then casts the sleep spell on Bufo. Then he casts all his magic to stop the meteor. He tries to move the village out of the way of the meteor with his magic, but he cannot quite move it.

Jake falls out a window when Finn tries to move the village. Finn tries to awaken Jake for help, who deflects the spell and brings a rock alive instead. He starts to regret ever trying to do this when the Old Wizards arrive with the same spells cast. Finn is glad that they came to help, but they say they just came to get away from the meteor. They help Finn anyway and are able to move the village away from the meteor. Once the meteor hits the ground, it causes a big explosion that disintegrates the clothes off of everyone and the fur off of Jake. Bufo then says that this was his plan for all of the 847 years that the meteor was coming, to find a soul responsible enough to abandon his post and move the town out of the meteor's path, and that no one will get free wizard powers anymore. Finn then says he should still give out free wizard powers and that he should not take credit for ideas that are not his. The episode ends with Finn and Jake walking on the plains from the beginning of the episode and meeting the Reaper again, this time offering a free Demon heart.

For a full list of wizard powers, see Magic spells

BUFO demonstrates what wizards can do. 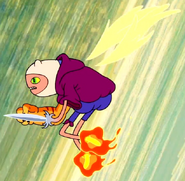 Finn, Jake, and the Old Wizards in the meteor crisis aftermath (sweet mother of Glob)

Meeting the reaper a second time 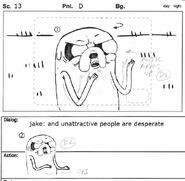