Steve Wolfhard[2]
Laura Knetzger[2]
"Winter Light" is the third part of the Adventure Time miniseries Elements and is the fourth episode in the ninth season of Adventure Time. It is the two hundred and fifty-sixth episode overall.

Finn, Jake, and Ice King travel to the new Ice Kingdom to confront the person responsible for the changes.[1]

Ice King, Finn and Jake plan out how to enter the Ice Kingdom without being detected. Ice King presents Finn and Jake with sweaters to keep them warm in the Ice Kingdom. As Finn is overlooking the Ice Kingdom, Ice King then pushes him down towards the ground. Jake and Ice King quickly join Finn in his descent. Finn pinpoints a weak spot in the ice dome with his sword and they come crashing in. Jake becomes a parachute and they float down into the darkness of the ice dome. On the ground, Ice King reveals a lantern to illuminate the darkness and Jake gives Finn his sweater to further warm Finn's body, much to Ice King's horror (as he believes Finn to have two heads for a moment). Ice King forms a sled from ice and they explore the Ice Kingdom.

Together, they travel through the now Patience's winter palace to find a way to rescue "weird lady" (Betty, as Ice King called her). Along the way, they witness how drastically the Ice Kingdom has changed: it is now a gloomy, depressing frozen desert covered in darkness with all of its inhabitants turned to ice. Jake's personality seems more subdued as they journey farther in. They crash into Carroll's ice house where Finn asks Carroll to join them to take down Patience St. Pim. Carroll decides against joining them, so Finn, Jake, and Ice King continue on towards the Ice King's castle, which has become much larger and more pyramid-like.

Reaching the castle, the group enters through a hole and parachute down using Jake. When they land, Jake is shown to have an icicle forming on his head. He seems very somber. Carroll brings Patience to them in an attempt to stop their plans. Patience seems very despondent and explains her plan of turning the Land of Ooo back to the age of the Elements by using the princesses' power with Betty's magic as the battery for the spell. However, the plan backfired horribly when the newly awakened Elements grew out of control and started using their power excessively, creating the current state of Ooo. Ice King discovers a frozen Betty being used as a table for food. He grabs her and escapes through the window. Jake has become engulfed in ice and is unwilling to follow, so Finn grabs him and they escape the dome with Ice King.

Back in the Cloud Kingdom, Ice King cooks a special soup to help melt the ice on Betty and Jake away. Now together, the four of them start to form a plan to rescue Ooo. Betty mentioned the if she were to have the Enchiridion she could perform a counter-spell to fix Ooo. Jake mentioned that they had previously destroyed the Enchirdion but Finn reveals that he had grabbed another one from the Farmworld. He warned Betty that book was crazy powerful but she noted that she's a little crazy and gave a rather unsettling laugh. 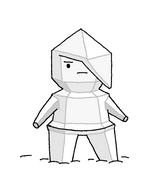 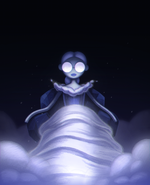 Promo art of Patience St. Pim by Benjamin Anders
Add a photo to this gallery

Retrieved from "https://adventuretime.fandom.com/wiki/Winter_Light?oldid=830663"
Community content is available under CC-BY-SA unless otherwise noted.