Issue 74
William is a worker for Princess Cockatoo

They appear in Issue 74, they work for the The Network Kingdom, creating show ideas.

They appear to be similar to a fox, they wear a leather jacket with a shirt underneath tucked into their jeans held on using a belt. They also wear a bandanna as a headband, and have their right ear pierced. They are never shown in color.

"I got this idea, it's SUPER edgy. It's set at an old folks' home, but there's a twist. Oh, there's a twist alright--the nurses? They're Vampires!"
"What I'm saying is, it's a Jinn and Fake Expedition, but with a twist.... They're Girls!" 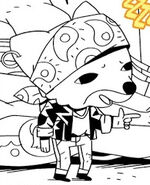