Maria Bamford
Yuka Keicho (Japan)
Orly Katan (Israel; Season 1 only)
Rona Bekerman (Israel; Season 2 onward)
Yasmin Kaza ("Malaysia; Seasons 1 - 2")
Wildberry Princess is the ruler of the Wildberry Kingdom. She has a high-pitched voice, is very girly and is a Wildberry Person. She makes her first appearance in the episode "Prisoners of Love," in which she is kidnapped by Ice King and forced to play an electric keyboard. She also helps chip away the ice surrounding Jake along with two other princesses after his body was frozen by Ice King. She makes a very short cameo at the beginning of "The Enchiridion!" when Finn catches Princess Bubblegum and appears to be smaller than her physical appearance. In "The Eyes," Ice King kidnaps her once again, but Finn and Jake save her. She also appears in "Loyalty to the King" as one of the Nice King's many admirers.

In "Jake vs. Me-Mow," Wildberry Princess was almost assassinated by Me-Mow, from the Guild of Assassins, but saves herself by detaching her berries, although she says this is a medical condition.

She is later seen in "Five Short Graybles." She is in the crowd at the talent show and gets hit by a basketball thrown by Lumpy Space Princess.

In "Bad Little Boy," Wildberry Princess appears with several other princesses, trapped in a cage, saying: "Maybe this story is a new form of torture" to the Ice King about the fan fiction he is forcing them to hear. Marceline later frees her and the others, but they stay inside Ice King's castle to listen to Marceline's story. She is considered a registered princess in "Princess Day."

Wildberry Princess is very girly. She has a crush on Finn like most of the other princesses in Ooo. She is very sweet like Tree Trunks and like Tree Trunks doesn't get angrily easily but when she does she turns red and doesn't attack but gets very defensive. She acts like a damsel in distress, in "Jake vs. Me-mow" she lets Finn protect her and save her from Me-Mow vs protecting herself. She also has a dark side to her as she was willing to execute Finn and Jake because Jake wanted to pay her for permission to sit on her head, however she does revert back to her sweet, kind self after Finn and Jake escape.

Wildberry Princess looks like a raspberry. She has a small gold crown, with a red gem on top of her stem. When her berries fall off, she resembles a cherry. When she gets mad her face turns the same shade of red her body is.

Wildberry Princess can detach her berries from her body, which she says is a "medical condition." It is unknown whether she can control this ability or how harmful it is to her. In "Jake vs. Me-Mow" she stated that she needed a hospital after her berries fell off.

Name in other languages

Cameo in "The Enchiridion!" 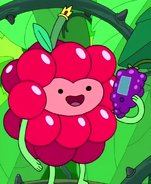 Wildberry Princess talking on her phone