The Wildberry Kingdom is a state where Wildberry Princess rules and lives. It makes a cameo appearance in "Princess Monster Wife." It looks like a bush in the shape of a giant tree, although it is completely covered in leaves and appears to have a tree trunk composed of a group of thick vines. The entire surrounding area is also filled with flat greenery or thick bushes, which grow a variety of small colorful berries and flowers. It can be assumed that this kingdom has a similar layout to the Candy Kingdom, with the giant bush being Wildberry Princess' home and the center of the kingdom and the surrounding area being the rest of the kingdom, containing the homes of its other inhabitants.

As of "Furniture & Meat," the kingdom has gone through a major renovation change and is now a city kingdom with separate houses and streets.

Homes of the Wildberry Kingdom

Inside of the Wildberry Kingdom 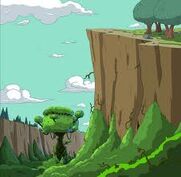 Outside of the Wildberry Kingdom

The Wildberry Kingdom as it appears in "Princess Monster Wife" 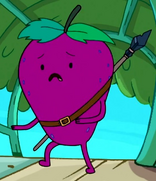 Crudberry back alley in crud town

Room
Add a photo to this gallery

Retrieved from "https://adventuretime.fandom.com/wiki/Wildberry_Kingdom?oldid=812717"
Community content is available under CC-BY-SA unless otherwise noted.