The Wildberry Guards are guards that appear in the episode "Jake vs. Me-Mow." They guard the Wildberry Kingdom and Wildberry Princess. It is unclear where they are posted; they only say that they walk by the window out of which Jake threw meat to fake Wildberry Princess' death. In doing so, they foiled Jake's plan by being very happy and vocal about the princess being okay, right after he tried to make Me-Mow believe that the princess had been killed.

They appear to be very devoted to their princess.

One of them looks like a maroon/purple elongated plum, the other is a violet color and looks like an inverted strawberry. The former has leaves on its head and the latter has leaves around the bottom of the berry, making it appear like a skirt. Both of the guards are armed with spears that they wear on their back, they have a strap holding it over their left shoulder. 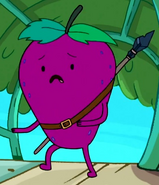 Add a photo to this gallery
Retrieved from "https://adventuretime.fandom.com/wiki/Wildberry_Guard?oldid=798950"
Community content is available under CC-BY-SA unless otherwise noted.