Jesse Moynihan
Ako Castuera
"Who Would Win" is the twenty-first episode in the fourth season of Adventure Time. It's the ninety-ninth episode overall.

Finn and Jake are determined to take down the Farm, but instead they fight each other for not training seriously.

The episode begins with Finn and Jake walking up to a cliff. Finn thinks that he can make the jump, but he tries and falls. Jake saves him, and Finn tries again. Jake comes with him, and they glide over the cliff. Finn yells that he did it, though it was actually Jake. Finn tells Jake that he likes just spending time with him, without other people.

Finn and Jake then see some Marauders climbing over a barn. They go down to investigate, and find out that the barn is actually a legendary fighter called "The Farm." After the Farm throws off all of the Marauders, "The Train," comes along to attack him. The Train attacks, but loses when the Farm sits on him. Finn and Jake run to the Train to make sure he is okay, and he says that he will be, since he says he has a friend that makes bionic legs. Finn states that he wants bionic legs, but Jake tells him that he does not and says that they will discuss it later.

The guys decide that they want to fight the Farm, and start training. But while Finn is taking training seriously, Jake plays Kompy's Kastle behind his back, stating that it is important that he remains the third best player of the game. Finn gets mad at him, and breaks the game, which flashes "Jake, I've always had a crush on you," before it dies. Then it starts to rain, without a cloud in the sky. Jake, in a fit of rage, tells Finn that he is going to break every bone in his body and heal him later with the magical tears that they got from the cyclops' eye. The boys start earnestly fighting, Jake growing to the size of a giant and battering Finn, and Finn deceiving Jake, causing him to punch himself. Eventually, they come to a log, and while Finn is going across, he falls, making him dangle by his head and part of his shoulders. Jake sees this as an opportunity, and starts kicking him. The log breaks, and both of the boys fall. Jake lands first and Finn lands on top of Jake, and the log landing on top of Jake and further tiring the Magic Dog. The two continue their fight, both weary and bruised. The two use cheap moves, Finn giving Jake an Indian Burn, and throwing mud in his eyes. Jake pantsed Finn, revealing Finn's red-and-white underpants, and grew his butt in order to squish him. Finn bit down on Jake's buttocks, and the fight finally came to an end and Finn wins.

After a bit more fighting, the boys decide that they both are going to fight the Farm without each-other's help. When they get there, they are so tired that they are easily knocked out. During their sleep, they see the Dream Warrior, who tells them "I'm here to hang with you in your together dream." and says seemingly random things that make no sense such as "two shiny golden apples, ripe enough to bite." and sends them back to reality. When Finn and Jake wake up, they realize that the Dream Warrior was telling them the right cheap moves to take down the Farm, and use them by putting mud in his eyes, pulling down his pants, and biting his buns. The Farm falls, defeated. Finn and Jake rejoice at their victory, hailed as "brogends" and given medals. 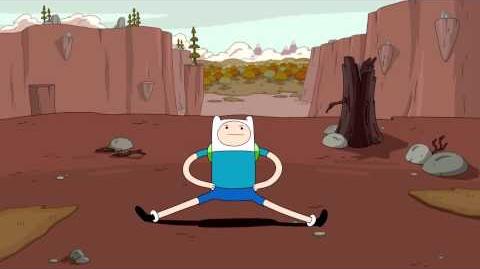 "You gonna fight this, the farm?" 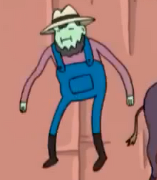 Farmer dropped by The Farm

Turn out the lights!

Finn took off his pants

"Put your pants on."

The marauders cheering F and J on

Here are the winners