"The Great Bird Man" (mentioned)
Whisper Dan is a character who first appears in the episode "The Silent King", ultimately becoming the character referred to in the episode's title. He appears to be a silent servant to the king and queen, as some kind of automaton or golem. In Xergiok's castle, his job is to turn cranks. He does not appear to have his own will or personality.

Gummy orders him to turn the crank that cuts the king's bed in half and turns it into a bunk bed. Later, Finn gets him to turn the crank to open a sensory deprivation chamber that Jake is lying in. Finn uses Whisper Dan as his scapegoat in order to escape the obligations of royalty. He does this by putting a cardboard box with a perfectly-drawn face on Whisper Dan's head, and the crown on top. This apparently fools the Goblins, who continue to serve him as their "silent king." The goblins do not seem to notice it is Whisper Dan even though it is clear he is not Finn. Whisper Dan rules the Goblin Kingdom after Xergiok (and Finn) leave the position.

About a year later, in "The Great Bird Man," it is revealed that Whisper Dan is still the king of Goblin Kingdom.

Apparently lifeless, even though he seems to understand Finn and the goblins, Whisper Dan is a giant stone and/or iron machine whose head resembles a light bulb. His hands are circular with holes in the center. He has two plain circular eyes and doesn't appear to have a mouth.

Whisper Dan turning the crank to make the bunk bed 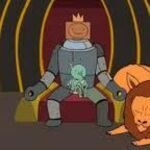