The Ice King is finally getting married, but consults Finn and Jake on whether or not to go through with getting hitched or keeping his life of abducting princesses.

Finn and Jake are hanging out, with Jake playing music on his viola, and Finn looking bored. Jake asks Finn if he is all right, and Finn says he looks that way when he is listening to music. Jake resumes playing until they both hear a knock at the door. They look out the window to see who it is and Finn is shocked: it is the Ice King! Finn immediately fights the Ice King and a short battle ensues. Ice King stops it and announces to the heroes that he is going to get married, for that is the reason he came, not to fight. Finn and Jake are shocked and Ice King shows them his bride, Old Lady Princess, who is in a wagon with other penguins. The bride rides off for her bachelorette party and Finn and Jake ask how it will feel for him to stop capturing princesses. Ice King seems to take it well, and so do the heroes. They go back inside their Tree Fort, but Ice King appears again and asks if Finn and Jake could help him have a "manlorette" party, which they reluctantly do.

Finn, Jake, and Ice King try to have fun at Ice King's manlorette party, but Ice King always causes problems, with people threatening to beat him up, and when he fights them, Finn and Jake have to slap him. The manlorette party is over and suddenly, Ice King gets worried about what could happen to him if he gets married so quickly. He worries that his bride may steal his things and put stress on him, so he declares there will be no marriage. Finn and Jake realize Ice King will capture princesses again and try to convince him to get married. They suddenly watch two swans together, with the male eating the female (who, apparently, is able to survive), and this convinces Ice King that he can eat his bride and that he can still capture princesses while his wife is in his stomach. Finn and Jake get confused on Ice King's decision and he declares the wedding is back on.

Finn and Jake attend Ice King's wedding, with him explaining that the bride will be tied up and lowered down, and when the bride touches Ice King's beard, they will officially be married. Finn checks the bride, noticing her interesting features, but sees the true nature of the bride inside her eyes, realizing the Ice King brainwashed her to marry him. Finn decides to free the bride and tries to stop the wedding, but Ice King freezes Jake, and tosses a penguin at Finn who tries to catch it, then freezes the penguin, then Finn falls into the snow. Jake uses his free hands to remove the engagement ring on the bride's finger, returning her to normal self, and grabs onto the ring and touches the Ice King's beard, with him marrying the Ice King instead of the bride-to-be. With the wedding over, Finn and Jake resume their old hanging out, with the Ice King appearing at the door again to celebrate his divorce with Jake. 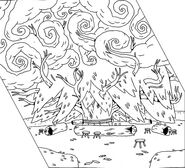 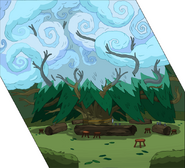 Ice King asks Finn and Jake to throw him a "manlorette" party.

Finn and Jake have a drink.

Ice King winks back at a flirtatious wink from a girl bear.

Finn and Jake having a relaxing moment

"But what if she's after my Demonic Eye and Ghost Pouch?"

Real princess is stuck in the Ice King's proposal.

Finn tries to free her.

In a weird twist, Jake and the Ice King become married.