What Have You Done?

What Have You Done?

Finn and Jake capture Ice King under the order of Princess Bubblegum without even knowing what he has done wrong.

Finn and Jake are seen in the Ice Kingdom at night, trying to avoid some Guard Penguins wielding Ice Axes. Finn says that their secret mission to capture the Ice King is underway, and then says he probably should not say that stuff out loud. The Ice King is seen in his depressed mode playing with a heart puzzle on his bed. Finn rings Ice King's doorbell and Ice King appears to confront the guest. At first, Ice King tries zapping, but then realizes no one is there. He notices that a small can of peanut brittle was left on his doorstep. Ice King opens the can and suddenly, Jake springs out of the can and grabs his crown. Ice King attempts to shoot them but he is unable to because his crown has all his powers in it. Finn yells out "Wrap attack!!" and ties up Ice King with a rope. Jake asks why they did this again, and Finn says Princess Bubblegum explained it all but was not very precise. They return with Ice King to the Candy Kingdom, which seems to be deserted. Princess Bubblegum arrives wearing a plague doctor mask and spraying a green fog everywhere. She takes them to a wall with a face on it and the face asks for the password. Bubblegum then pinches the face's cheek, and the wall suddenly turns into a door.

Finn and Jake throw Ice King in a jail cell, with only two bars, but then add more. Jake looks at Ice King's crown and says it was probably stolen, but Ice King states that he made it with the magic that he stole. Ice King begins to tell the two that he is innocent and that he hasn't committed a recent crime in a while and did not deserve to be here, however, Jake disagrees. Ice King shows them a mirror (which was broken repeatedly after Ice King accidentally slammed it on the ground) explaining that they were the true jerks and they deserved to be in jail. Finally, Finn is convinced and decides to let Ice King go. At first, Ice King thinks it is a trick, but later decides to go along with it. Finn and Jake state that since they're the bad guys this time, they have to go to jail. Ice King gets his crown, opens a magic door, and escapes. Princess Bubblegum then walks into the dungeon and puts on a pair of pink gloves for interrogation. But when she turns around and sees Finn and Jake in jail, she gets irritated when Finn tells her that they let Ice King go.

The Princess takes the two to the grand hall where they see all the candy people lying in beds embedded in ice. Princess Bubblegum explains that Ice King kind of did this and kind of did not. 3 days ago, the Ice King wanted to show off his new trick to the princess by making snow from his beard but everyone became infected with Freezer Burn Flu. Princess Bubblegum said Ice King did not mean to cause the disease, and she learned that the only way to cure it was to obtain the "sad howls" of Ice King himself. But, when she begged to Ice King to help, he thought she was hitting on him. So she knew the only way to take the Ice King's howls was by force, that's why she told Finn and Jake to capture him.

Finn says he just cannot beat people up for nothing because it is against his alignment, but he promises he will find a way to save the Candy Kingdom. Princess Bubblegum thanks him, but she almost bursts into tears under all of the stress, so Finn calms her. Then Finn and Jake head back to the Ice Kingdom to obtain the howls.

When Finn and Jake enter, Ice King comes out and asks if they want to participate in game night, because he now thinks that Finn and Jake are his best friends for letting him go. But when Finn tells Ice King to howl, he says he could not possibly howl without giggling. Ice King walks over to Finn and says that there was a bug on him, which in reality was just Jake, only smaller. Ice King hits Finn, wanting him to get the "bug" off. Finn gets an idea on this and pretends he is dead. Showing guilt, Ice King picks up Finn's body and howls extremely loudly that it reached all the way to the Candy Kingdom, curing all of the inhabitants. When Princess Bubblegum sees that her people are getting healthy, she faints of happiness. Ice King then drops Finn and walks away. Finn says that was a mean thing to do and Jake says that if he came across Finn's lifeless body he would "clasp him dramatically for a kajillion years." Finn then plays dead and Jake carries him and wails back to the Candy Kingdom.

The face on the walls 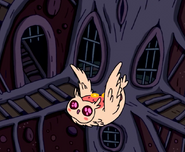 The Oculus of Rehabilitation

Ice King's crown on the Shelf of Penitence