"Water Park Prank" is the thirty-seventh episode in the sixth season of Adventure Time. It's the one hundred and ninety-third episode overall.

After rescuing Princess B'Onangutan from Daddy Sad Heads, Finn and Jake head to a post-apocalyptic water park for a day of fun.

Finn and Jake are heading over to the Wet Pipes Water Park when Finn suddenly realizes that he forgot his underwear. He quickly runs back to get them while Jake heads on to the water park by himself.

Finn crosses through the Toadstool Fields as this is a shortcut the the park. On his way back he sings his Underwear Song while heading back to the direction of the Water Park when Princess Bubblegum who is also heading to the water park to coach swimmers surprises him. As they walk they hear a cry coming from a puddle nearby. They find Princess B'Onangutan crying. Princess B'Onangutan tells them that she was only trying to dip her legs in the water when she got infected with Daddy Sad Heads. Finn tries to save her however carelessly gets the toxins stuck onto his body too. After a visualization technique thought out by Princess Bubblegum, Finn saves Princess B'Onangutan who offers him a Universal Token and a lift to the water park.

At the water park, Jake waits impatiently for Finn. Finn suddenly lands next to Jake and tells him what happened.

They are next seen coming out of the locker room all dressed in swimwear and put their things in the locker. They start to run to the water slides but are stopped by a lifeguard who tells them to shower before riding any of the slides.

After a shower, the two head up the stairs of a slide when they notice Ice King at the back of them in line. They get the idea to start a prank. Jake gets out of the line to get distraction materials. Finn starts to sit in position to slide down and creates a fake act to try to build up his courage before he slides down. Jake on the other hand has now climbed up the water slide and given the walls of the slide two knocks which secretly indicates to Finn to slide down at the instant. Finn slides down and stops halfway telling Jake to inflate himself which will block the water slide. Finn is pushed down the water slide. It is now Ice King's turn.

Ice King constantly tries to slide down however is bounced back up by Jake's body. In confusion, he tries to argue with the lifeguard but fails in proving a point. When he sees Finn at the back of him smirking, Ice King starts growing suspicion. He tells the lifeguard that he thinks Finn and Jake have something to do with the problem and looks closely at the viewing gallery to which he sees "Jake" (a life-board and a pamphlet on a bench set up to look like Jake reading it.) Ice King slides down one more time but fails to reach the bottom. Finn however reaches the bottom. When Finn and Jake head up the slide Ice King grabs Finn and assaults him for causing the problem. When ordered to leave the water park by the lifeguard, the Ice King refuses and sits down.

Now in the locker rooms, Finn and Jake notice the Ice King being pushed on a stretcher while tied down with cords. The Ice King is banned for life from the water park. He lowers his hand and throws ginger hair on their faces from the ground while near them. He laughs as he is pushed away

Finn and Jake are now away from the water park and are drying themselves with the sun's rays. They walk along with Princess Bubblegum. Finn sees a puddle and tries to wash the ginger hair from the water park off by going inside. However, he carelessly gets Daddy Sad Heads stuck on him again. 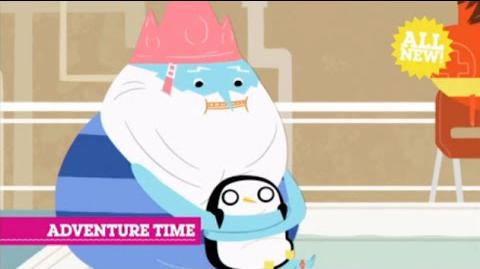 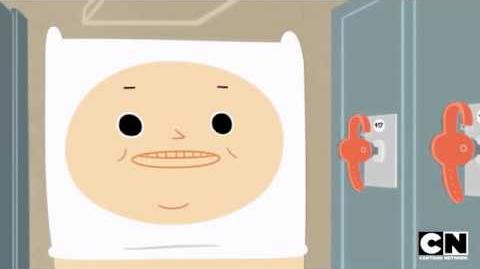 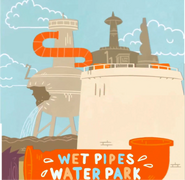 Finn bouncing off the toadstools

Jake at the entrance of Wet Pipes Water Park

Finn and Jake stopped by the lifeguard

Finn hits his head at the bottom of the slide

Ice King's ready to slide down with Gunter

Ice King gets blocked by Jake

The lifeguard stops the fight

Ice King can't use his powers

Finn and Jake ride out in style

Finn and Jake getting dried by the sun 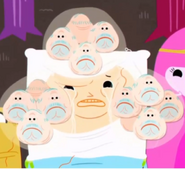 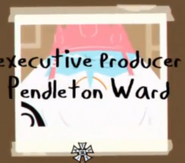 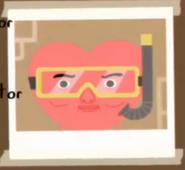 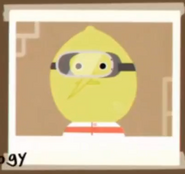 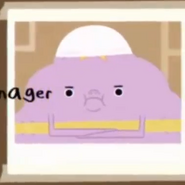 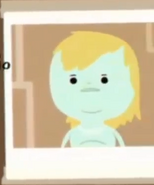 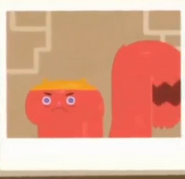 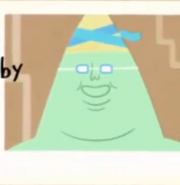 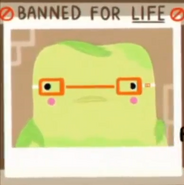 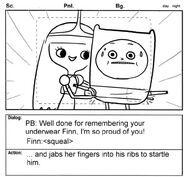