Water Nymphs are water spirits from traditional folklore, in this case depicted as having moving bodies of water for hair and wearing swimsuits. The Nymphs are known for their lack of being able to tell a good joke without messing it up.

The Nymphs make their first appearance in the episode "Power Animal." They're seen playing in the pond near the Tree Fort telling terrible jokes to each other. They later attend a party in the Cloud Kingdom.

Denise (the Nymph in pink) reappears in "Wake Up," where Glob was seen asking her on a date with him and his siblings, which elicits a disconsolate expression from her.

The Nymphs return together in "Thanks for the Crabapples, Giuseppe," with a new Nymph, who was first seen texting on her pink phone and later demonstrated to be very active in making decisions for the other Nymphs and giving out orders. When Abracadaniel failed in luring them into joining their trip, Ron James enticed them by putting on Eye Twinkles. When the bus has sunk in a lake, the girls attempted to help. However, when they failed to lift the bus, they flee selfishly, leaving the others behind.

All three Nymphs appear in "The Cooler" on one of Princess Bubblegum's surveillance cameras.

In the "Frog Seasons: Summer" short, three water nymphs appear on donut floats while going down a river. One of the nymphs invite Finn and Jake to go into the water but are turned down. Later in the short, when Jake forcefully puts the crown on the frog, the same water nymph states a saying.

It is revealed in "Beyond the Grotto" that the nymphs live in a grotto that's under a comically deep pond outside the Tree Fort. The nymphs have activities such as smashing frogs and eating hotdogs.

The first two Nymphs both have humanoid appearance, green-tinted skin and hair that looks like rushing water. Denise has long hair and wears a pink bikini. She is also skinnier and taller than her friend. She wears multiple water bracelets on her arms and leg, and has a gold bellybutton piercing. She also has pink lipstick while her companion has none. She has white eyes.

The other Nymph has short hair, similar to Princess Bubblegum's at the end of the episode "Death in Bloom," and a blue bikini. She is slightly curvier, shorter and has bluer skin than her companion. She has no belly button piercing. She has black eyes.

The third Nymph has long hair tied in a ponytail and wears a straw-colored bikini with white stripes. 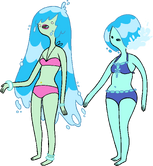 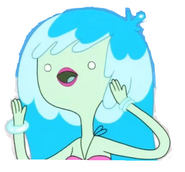 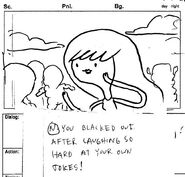 Retrieved from "https://adventuretime.fandom.com/wiki/Water_Nymphs?oldid=812415"
Community content is available under CC-BY-SA unless otherwise noted.