"Walnuts & Rain" is the thirty-first episode in the sixth season of Adventure Time. It is the one hundred and eighty-seventh episode overall.

Finn and Jake are returning from an adventure at night through a forest when they accidentally stumble into two large holes. After regaining consciousness, Finn opens his eyes in a large room where the walls are covered in shelves filled with food, a large stovetop with a fume hood, a wooden, little food people with a steak face and watermelon body (Food Boys), and a huge, plump being. The Food Boys are throwing food into the large man's mouth and when Finn asks the large man where he is, he discovers he is in the Kingdom of Huge. He introduces himself as King Huge. Finn learns he fell through a crack in the ceiling and would like a boost to get back up to search for Jake. The large man refuses saying Jake will probably be on his way to find Finn, and Finn should stay so as to not miss Jake. The large man also wants Finn to stay for the 'show' in an hour - the chiming of the cuckoo clock. Finn reads the inscription on the cuckoo clock, "IN TOIL WE KRIMBER." Finn reluctantly abides by his guests request, but enjoys the food.

The scene changes to Jake. He too is regaining consciousness and opens his eyes to see a bear playing Freecell with a candle tied to his head and bells on his neck and body. who explains that he fell down the hole and landed on his wooden raft. Jake notices that the raft is falling in the dark hole and has parachutes to 'fall' slowly down the hole. Jake then eagerly tries to stretch back out of the hole to search for Finn, but the bear convinces Jake to stay in a similar fashion to how King Huge convinced Finn to stay.

Jake stretches back down to the falling raft, We learn the bear has been 'falling' down this hole for a very long time and has lost some memory (he posits Jake was unconscious during his fall and could have been falling for weeks or months before hitting the raft) and thinks is name is 7718. The carved inscription on the wood of his wagon spells the name 'BILL,' but upside down, which is why he thinks his name is 7718.

Now back to Finn, who has witnessed the cuckoo clock's chiming with King Huge. He wants to leave, but the king won't let him leave as he argues that it isn't the Huge Kingdom's way and orders his Food Boys to tie Finn up with spaghetti. King Huge tells Finn that all that Finn wants will come to him as long as he stays.

Returning to Jake, We hear the story of how Seven fell down the hole after his horse got startled. His wagon was wedged in the hole and knew he would fall, so he built parachutes on his wagon so as to soften the fall. He has been subsisting on walnuts and rain that fall down the hole. For fun, 7718 has been playing Freecell. It's also clear that 7718 has become bit 'weird' due to his long period of solitude. Jake realises that Seven isn't aware of two-player card games and offers to play with Seven. Seven then says "I forgot there were games like that," and they both fall backwards laughing out loud and enjoying themselves.

Finn on the other hand, is forced to listen to King Huge's story but tries to connect a plan to escape which requires the combination of many unlikely scenarios happening perfectly. Once he begins his plan, it starts well, but eventually fails as King Huge notices him untied. He then starts getting chased by the others and tells King Huge that he's changed his mind, and is going to destroy the cuckoo clock. He eludes attempts to recapture him, and jumps in between the clock and the wall it hangs on and pushes the clock off the wall. It falls into a pot of hot water, which extinguishes all the cooking flames that have been lit continuously for an interminable amount of time. King Huge gets exceedingly furious. Without the cooking flames lit, this stops the hot exhaust from going into the fume hood. We then see Jake and Seven who are free-styling, finally fall and realise that they hadn't been falling, but merely riding the heat exhaust from the fires in the fume hood's exhaust pipe. The wagon falls onto the pot of water with them on top. Jake notices Finn being held in the hands of King Huge and Jake asks "Who's your friend." Finn shouts out "He's not my friend, he tried to kidnap me." King Huge threatens to kidnap Jake too but Jake gets angry and turns his fist into a giant one punching Huge King in the face.

The trio escape to the grasslands after a fight with King Huge. Finn and Seven are riding on Jake's back and Finn asks Seven what he wants to do first after being trapped in the hole. Seven says he wants a hotdog. Finn says that that's disgusting but Seven simply replies "I don't give a toot." 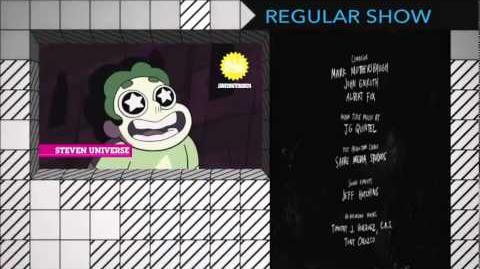 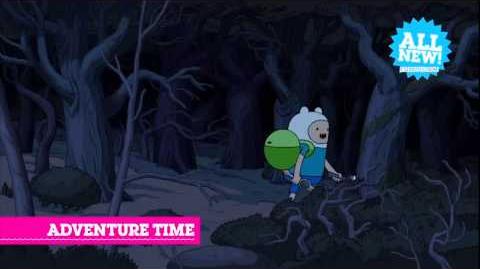 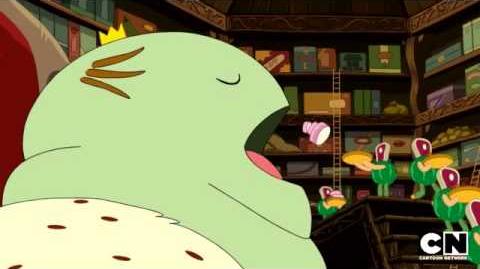 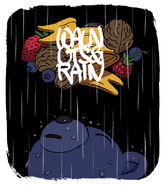 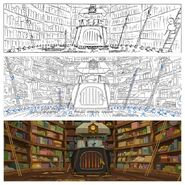 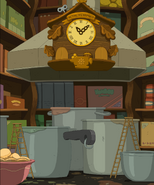 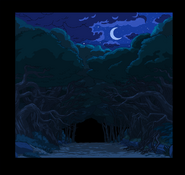 7718 and Jake
Add a photo to this gallery

Retrieved from "https://adventuretime.fandom.com/wiki/Walnuts_%26_Rain?oldid=821817"
Community content is available under CC-BY-SA unless otherwise noted.