The viola is a real-world instrument that is often a focal object in Adventure Time. It is typically played by Jake, however other characters also play it.

The viola is a member of the violin family. It is the middle voice of the group, having a lower pitch than the violin, but higher than the cello. It is often mistaken for a violin, due to both instrument's pitch and similarity in size and shape. The four strings from lowest to highest are C, G, D, and A. 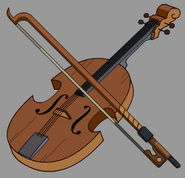