The video camera is the main object Finn and Jake use to film in the episode "Video Makers." It was placed on BMO's head to catch footage for Finn and Jake so they could make a new video for their club. Where and when they acquired it is unknown, although Finn dug it out of their treasure, which suggests they got it on an adventure. It would take twenty hours to edit the final cut of the video, but the film was replaced by BMO with a video he made with footage he had gotten from filming, to get Finn and Jake to stop being mad at each other. It is later revealed in "Conquest of Cuteness," that BMO has a camera built inside of him that takes photos, but uses a video camera attached to him in "Video Makers." Jake uses this camera in "In Your Footsteps" to film the bear eating Finn Cakes. 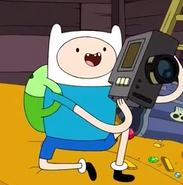