Stanley
Veggie People
Veggie Village is first seen in "The Jiggler" as the home of Stanley and other fruits and vegetables. It is later the site of a Science Conference attended by Princess Bubblegum in "Death in Bloom." It houses the Veggie People. 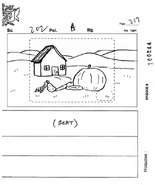