The Veggie People are the inhabitants of Veggie Village who first appear in "The Jiggler." They appear to be normal fruits and vegetables. The only named Veggie Person is Stanley, a watermelon. Some unnamed Veggie People include a squash, a pumpkin, some carrots, and a few heads of cabbage.

The Science Conference takes place at Stanley's house, suggesting it is important to the Veggie People. At the Science Conference, the Veggie People have some scientific-looking equipment, though how they made or brought it there is unknown (let alone how they got there in the first place). Princess Bubblegum seems to acknowledge their unresponsiveness but not think anything unusual of it. 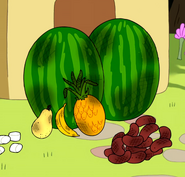 Stanley with his family
Community content is available under CC-BY-SA unless otherwise noted.
Advertisement