"Vault of Bones" is the twelfth episode in the fifth season of Adventure Time. It's the one hundred and sixteenth episode overall.

Finn takes Flame Princess on a dungeon crawl in order to alleviate her fears that she's evil, but finds that he may have doubts about her being completely good.

Finn and Flame Princess walk into the forest looking for a dungeon entrance. Flame Princess then uses her "Heat Sense" and guides Finn to a secret switch that opens a door. As they enter, Finn finds a gauntlet, as well as a torch which he asks Flame Princess to light for him. Flame Princess suggests they do not need a torch because she is made of fire. Finn states that it is cool to use torches in dungeons.

Shortly after entering the dungeon, the two of them encounter a skeleton who asks them what they are doing there. Flame Princess simply replies, "Burning you alive," and raises her arms to burn the skeleton, only to be stopped by Finn with his own ways of manipulating the skeleton, specifically having it do the splits and then shouting at it for his own advantage. The skeleton points them to a treasure chest that is in the corner. They investigate, and find that the chest is locked and needs a key.

The two of them then go off and search more and find a large skeleton guard. Finn has Flame Princess shoot down a bone chandelier and they come charging at it, but Finn seems to fly straight through it. It soon is revealed to be a mere hologram, unscathed by their attempts to attack it. Finn realizes that if the skeleton is a hologram, then there is something hidden in their area. While Finn searches around, Flame Princess sits down and wait until Finn is done searching. Flame Princess falls asleep, but Finn wakes her up and tells her he found a key and they get to go back to the beginning of the dungeon to open the treasure chest.

After discovering the key does not work on the chest, they go back where they were in the dungeon. Flame Princess thinks to herself that this is getting boring. When they get back to their spot, Finn spots a hole in a wall and sees a large vault with a keyhole on it. He gives Flame Princess the key and tells her to go first in the hole and open the vault. When she opens it, a winged skeleton comes out and asks her to take its place. She burns the skeleton back into the vault and then proceeds to burn the entire vault to ashes. Finn was disappointed in her for destroying the skeleton and the vault without looting first, but Flame Princess defended herself by telling him that the skeleton wanted her to take its place. Finn searches through the ashes to see if there was everything worth looting and finds a key which he says that they can go back to the beginning again.

Before they can go back, Flame Princess tells Finn she is not having fun anymore because she does not like Finn's way of approaching the dungeon. She thinks that he is having her do it his way because he think she is evil. Not wanting her to be displeased, Finn allows Flame Princess to do everything her way, which mainly involved burning everything down. She burns everything in the following part of the dungeon which attracts the attention of Goo Skulls. She gets too distracted by the thrill of burning destruction to notice Finn getting taken by a large monster-like skeletal beast. It starts to cover Finn in goo as he is extremely worried that when Flame Princess attempts to save him, she will burn him alive. When she is about to attack the large skeleton, she instead uses one of Finn's previous tactics: she makes it do the splits and forces it to let go of Finn, like he did with Boney previously. He tells her that he was worried about her burning him alive, and Flame Princess gives Finn a very pleasing response. She says she would never do that to her boyfriend, this being the first time she ever calls Finn her boyfriend.

After finding the way out of the dungeon, they leave with several keys and atop a hill, Finn and Flame Princess try using all of the individual keys on the chest to see which one will open it. Flame Princess thanks Finn for taking her to the dungeon and how she forgot how fun it is to destroy evil things. Finn suggests next time they should go to a farmers market, which Flame Princess suggest they should burn it. After they manage to open the chest, they find a peculiar, green, butt-like face that winks at Flame Princess. Thus ends the episode. 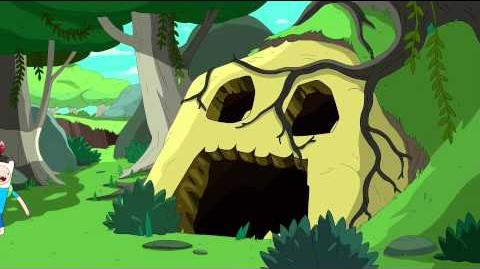 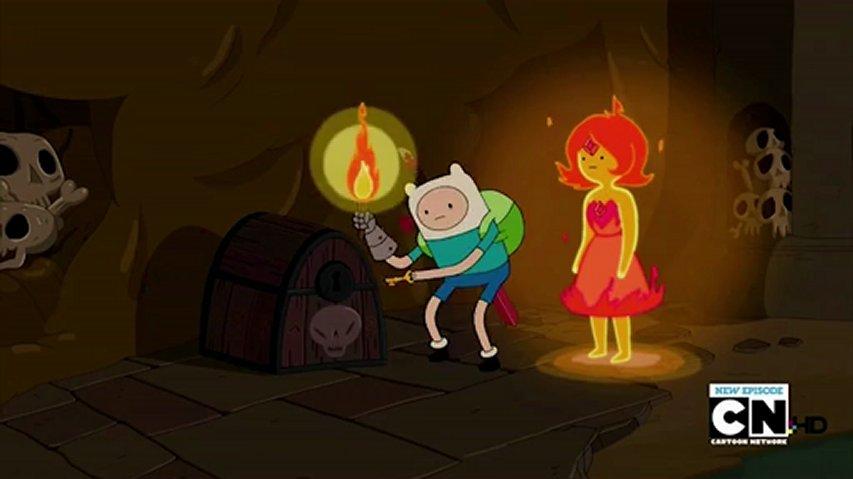 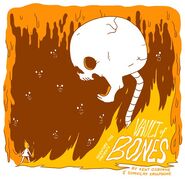 Promotional art for the episode 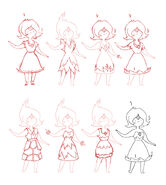 Jake waiting for the tea

"Oh, cram it to the butternuts! It's locked!"

"The power of destruction!"

"Release him or feel the wrath of the Princess of Flames!"

"Do the splits, thou milk-livered maggot pie!"

"No way! I'd never do that to my boyfriend."