Unknown, at least around 989 years (Including the time when he was dead)

Billy Brown
The Vampire King was the former ruler of the Vampires until Marceline staked him. He and his court are the main antagonists of the miniseries Stakes.

The Vampire King has the appearance of a large, muscular man with animalistic features, including a face resembling a lion's, scaled, reptilian hands, birdlike feet and a forked tongue like a snake. He wears a white suit, a wine-red cape and a crown resembling the branches of a tree or bush. Jake describes him to look like a stop sign coming out of a loaf of bread.

After his vampiric essence was extracted at the end of "Checkmate," he was divided into two beings: His mortal self was restored to its original form as a seemingly mundane lion, while his vampiric essence became a cloud monster resembling a lion with long, spindly legs and snakes growing out of his head.

After Marceline absorbed the cloud with her demonic powers, the Vampire King appeared to Marceline as a mental projection, appearing as a miniature version of his vampiric self.

Despite being the ruler of vampires, the Vampire King has an odd, somewhat eccentric and silly demeanor. He appears to like animals a lot, and is seen dancing with a cow shortly after his return. He is also accompanied by several animals throughout the mini-series.

He is not without a darker side, as he acted considerably vengeful and cruel after Marceline had killed all of his fellow vampires in the past. As a sort of punishment, as well as an attempt to continue his species, he bit Marceline just before he was destroyed. In the current time, he seems apathetic to being a vampire and later admits to wishing to be rid of his vampirism. He also doesn't appear to care much about his fellow vampire brethren, as he made no attempt to stop them from going on their own.

His pure, vampire cloud-like half appears to be largely mindless and violent, seeming only to desire to consume and turn others into vampires. His mortal lion half, on the other hand, appears to be just a normal animal.

As a vampire: The Vampire King is widely acknowledged as being the most powerful vampire in the court, and he lived up to this reputation, holding his own against Marceline at full strength in a fight. As a natural vampire, he has a set of unique abilities:

After being absorbed by Marceline: 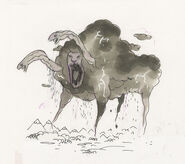 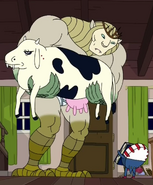 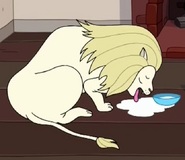 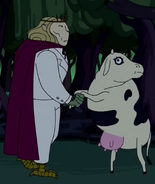