Hi Adventurer Bullet, welcome to the Adventure Time Wiki! You're receiving this automated message because you made your first contribution to this wiki. Someone will probably see your edit to the Forum:Burning Low Theories page shortly.

Please take a look at our rules and manual of style to learn about how to correctly create and edit pages on our wiki.

I saw the pictures was that herobrine in the house or an enderman?

Well I never did say I made it up myself now did I? Granted I didn't know there was a photo of it, as I remembered him saying that and it just popped into my brain. Adventurer Bullet (talk) 17:00, November 25, 2012 (UTC)

Hi, I'm the PrinceoftheFireKingdom and I'm a huge fan of Flame Princess. She ROCKS. 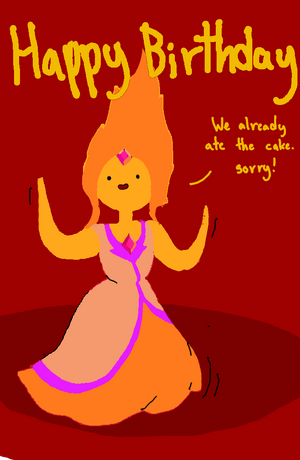 I'm unable to be on chat, but I did not forget! Pardon the quality, one can only draw so well so quickly.

All or part of this message was removed by an administrator because it violated this wiki's Code of Conduct.

You talkin to me Annoying Anon or Flame Princess? Are you anons out there dumb? Use "Leave Message" button to leave a message to the users talk page, not to me. If you dont follow the instructions, then pretend i am Spock from Star Trek

Sorry for the inconvenience, I was sleeping at that time. But I think Fionna hastily banned him now. --I'd like your feedback as to whether I was brilliant or simply outstanding. 00:44, March 9, 2013 (UTC)

Hi Friend i so cool we are same name right

Can you please remove my ban?

I asked a staff to unblock me,she did so and then told me to talk to mini about my ban,he isn't on xC can you do it instead?Please?

Please,Flame Princess ,i don't know if you banned me of chat or other person ,in this time i was sending "emotes"  ,someone saids that i was spamming,i spammed too times but in that time i sure i really sure that i not did it , and what i read in the rules ,i don't see emote is spamming" -so i felt strange can you help me

Thank You Flames ,i just will talk that i just was spamming cause I Have not read the Chat rules and also because was my first Chat day ,i never chated before. After i read the rules ,where was writed "No spamming, which can be defined as excessive posting of the same message multiple times, or posting numerous messages of gibberish with no legitimate meaning." ,I don't found Emotes maybe for don't be a original code from wikia or something ,moreover that i don't know that how to do this emotes. but over all Thanks to help me and have a good week.

Sorry,in moment i stay shy to talk to you,i have do it a time so i think that you started to be angry.After i been banned ,i don't really understanded what happened i search for other person that was in the chat in that while ,to help but in the time u sended your post ,so i don't refused ,so i decided to read,I read all them,okay?

but Flames,have one little thing i wanted to ask to you ,if you know please tell me- When the people are banned. Can the error chance's, decrease at each time they be banned ?

I'll be here for you always , and always be with you.

Let's be friends. That's all I wanted to say...

Yeah, I want to be friends. I follow the Code of Conduct and I have NEVER been banned....( I barely come on chat!)

I am a creative girl who loves to draw and color and many more activities...I love all school subjects.

Okay you might think I am a nerd. Maybe I am but okay. Let's just be friends.

Hi FP is me hoangduongnet

Do you know that you banned me from the chat with infinite times? 2 more months i will be 13 so can you change the chat banned time into 2 months? On the August 1? Thanks... May 17 2013, 7:49 PM (UMT +07:00 Bangkok, Hanoi)—Preceding unsigned comment added by User:Hoangduongnet (talk • contribs)

It's May 19th, you said I could be unbanned from chat today.

Hi I just wanted to remind you that you are so amazingly awesome!! I'm really glad that we're friends and I hope that we continue to be forever! You are such a unique person with a stunning personality and you're like one of the nicest people I know, so thank you for being my friend and thank you for being you!

I'll be here for you always , and always be with you.

How do u ban people from chats? —Preceding unsigned comment added by Moonfox (talk • contribs)

First off, I'd like to congratulate you on getting your admin powers.

Secondly, I'd like to ask you two quick questions:

1: Did Tavis promote you or was it someone else?

Thanks and congratulations again. Cheeseburger

So who did promote you? Cheeseburger

The thing is, I don't really give a shit. :P

You are currently away on chat, so when you come back, there is a user called User:Miss-Ferret-Girl trolling, spamming, and being rude.

That is just one of them. I can upload more if need be.

I blocked you because you kept adding speculation to the page. And I did tell you to stop before your final edit on it. You should really think "Hey, this guy is undoing my edits, I wonder why?"

Actually, I did. I guess I just wasn't paying attention. Anyway, the only reason I edited the article is because I saw a similar line in Gunter's article. I guess I should have start having an account to communicate better with other users but it won't allow because I'm just around 10 years old. Thank's for the clarification. Sorry for my troglodyte behavior. 180.191.49.37 10:01, May 27, 2013 (UTC)

Hey Flame Princess, you still haven't answered me about why you didn't allow me to discuss the block. According to what I have seen in some talk pages of users, admins and burecrats, people I see that have been blocked from both chat and editing, and some only editing, have been allowed to "discuss" their ban while I have not been allowed. Thank you for the other clarification. P.S. I mean discuss as complain, which I MAY have done to you after my block. 180.191.49.37 07:02, May 29, 2013 (UTC)

I need help. You're a good editer. I want to know how to make that little youtube thing. Not the Video thing that is shown in the "Add features and media" section when you're editing. I know that Flambo has it in his signature, and so does Nihi the Brony.

wht did i do now do u just hate me

plz put me back on

no i was just lying about that and like you said earlier real age could be used in horrific ways so i gave you a fake age could i just have one more chanceAawatchusay (talk) 20:18, May 28, 2013 (UTC)

4 things, please read them thoughtfully and know that I have respect for you and this wiki.

1. I am trying to make peace with Mini, but he won't agree to disagree about the matter.

2. I don't see how I have broken any rules or how my blog posts warrants a block or a ban or whatever, just because you disagree with it.

3. I have already explained about Ins4, also I honestly didn't know the difference between a block and a ban, I thought the terms were interchangeable

4. I am honestly sorry and I would like someone to tell me why my blogs are wrong or against the rules because up to this point everyone has failed to do so.

FIame Princess, it seems that your signature is breaking the new Adventure Time Wiki rules, please look over them and change your signature as needed.

I would like to inform that I have made several changes to Template:Speculation. I have made it adaptable to various situation and used on the new page I created. TheMostBoringManInTheWorld 02:58, May 31, 2013‎ (UTC)

I have a suspicion that this user: User_talk:MarcelineVQ2002, is underage, the reason I think she is underage, is because of the "2002" in her name, and the fact that she isn't very good at spelling.

i accidentally wrote  break the worm on wormo. that was king worm.

Be an admin to my Wiki http://nick-sanjayandcraig.wikia.com/wiki/Sanjay_and_Craig_Wiki —Preceding unsigned comment added by TEACUP54 (talk • contribs) 11:14, June 7, 2013‎. Please sign your posts with ~~~~

Please do not assume and hunt down people who are too young, for all you know that is a persona and they aren't really breaking the age rule.

You just un-did my edit on "Rashetta"

Rashetta however, gives Finn confusing information that is coded in riddles and will often fart in response to Finn's questions.

The farts are part of his riddle which ultimately help lead Finn to his destined outcome.

The way the section sounded before was more of the idea that the farts were just something he did... I wanted to make it a way that explained that the farts are PART of his riddle. I wrote a huge comment about this back when Puhoy came out explaining... but I just never put it in the wiki because It sounded awkward. I believe the way I explained it in the post was good.

Just wondering why you delete it, so I dont get bad marks in the future.

ALSO there is no way to send a private message? how weird.

It's a link to the Spanish version of that page. If you see links added that start with [[es: , that's what they are. That one user seems to be the only one who adds them. :D

Really infinite ban I'm 12 and I can't just come back on my 13th B-day I just don't understand can't I just come back when I'm 13??? —Preceding unsigned comment added by Italia9467 (talk • contribs)

http://adventuretime.wikia.com/wiki/User:Blackfusion has been cursing and insulting me. —Preceding unsigned comment added by Redzephyr01 (talk • contribs)

Flame Princess plz don't do This to me u dont understand he called me inappropriate words I mean A MONTH come on he's say something offensive and I'm the the bad guy here?!?! Unbelievable —Preceding unsigned comment added by Turtlegirl171998 (talk • contribs)

Do you think I could be chat mod?

I have been on this wiki for 3 years, and I go on chat alot. Would you say I could be a chat mod? It doesn't say how many admins have to approve this. How many?

Though apparently this wiki doesn't have it in its style guide (thought it did), many wikis suggest putting the pluralization in the link for ascetic reasons. I think that's why Anigoads did that.

Jealous Of My Rice Cake?

Retrieved from "https://adventuretime.fandom.com/wiki/User_talk:FIame_Princess?oldid=535415"
Community content is available under CC-BY-SA unless otherwise noted.