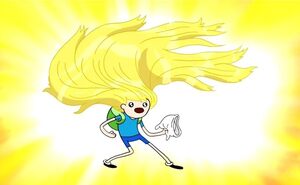 Adventure Time is making an appearance at San Diego Comic-Con! There's always a ton of questions we wish we could ask the cast and crew about the show, what it's like behind the scenes, and more! Wikia has a chance to get a few questions answered this year, and we want to know what YOU want asked! Please note that we will only have a limited amount of time, so there's no telling how many questions we'll be able to get through.

This post is now closed and the transcript of the final interview has been published below. Please read and comment on your favorite parts, so we can keep doing things like this in the future!

Q: Congratulations on just the massive success of the show. Did you guys ever expect it to become what it is today?

OO: No.
JS: No.
JD: No. I mean, that’s the thing about being on a show that’s like a cult hit, like this, and it’s kind of creeping… I think it’s mainstream now. It’s totally mainstream.
OO: <in Marceline voice> I knew Adventure Time before all those mainstreamers. <everyone laughs>
JD: But I mean, you know, if you'da told me seven years that, you know, a character I play is on a bullet train in Korea I’d be like “Really? That’s ridiculous.” So, it’s pretty shocking.
JS: It’s kind of like… I mean you, no matter what, with anything you do you hope it’s successful and you hope it turns out well and you want it to be good, but you never… you never expect anything to take off because there’s so many things that you do that you’re like “Oh, this thing’s so awesome, and it doesn’t…”
AM: Like the law of attrition for entertainment product is freaking brutal. Most of the sperm cells die on their way to fertilize the egg. <everyone laughs>
OO: Just as an actor in general, you can’t get your hopes up… you can’t get your hopes up for anything.
AM: Once in awhile one gets through and like, “ding! success!” you know what I mean?

Q: How much of this is actually like recording time? Just this back-and-forth.

JD: This is exactly what happens in-between recording lines.

Q: Can you tell me about that dynamic? You guys all voice together in the same recording studio for episodes right?

JD: Yeah, for the most part.

Q: So, seven years… how’s that relationship changed for you guys? Is it just the same, or… ?

TK: It’s gonna a lot more awful. <everyone laughs>
JS: Yeah, we kind of hate each other now.
TK: I used to like John.
JD: Tom “The Diva” Kenny over here.
TK: I started out, you know… I started out cutting John a lot of slack.
JD: Yeah, and now…
TK: But he just keeps on doing the same irritating shit for seven years. <everyone laughs>
OO: I feel like all the boys are constantly dicking around, and I just sort of sit there, like…
JD: <Barry White voice> Dickin’ aroooouund…
TK: You don’t just sit there! That is the biggest lie of all time.

Q: Okay, so what’s the truth? <everyone laughs>

TK: It’s very spirited, sometimes the people on the other side of the glass have to be the responsible adults in the room. <everyone laughs> So that actual recording gets done. But you know, yeah, I always think about like… you know, there’s some parallel universe like “Earth-Two” where I’m like an insurance salesman working in an office, you know what I mean. Like ready to blow my brains out. <everyone laughs> You know what I mean? The Tom Kenny of Earth-Two is going “let me tell you more about our specials… we have a very lovely trout, it’s crusted with breadcrumbs.” <Kenny makes a gunshot noise> <everyone laughs> So we just feel… you know, you go, you mess around with fun interesting creative people every day. You know what I mean? They give you money.
JS: Hopefully don’t blow our brains out.
TK: It’s the best scam in the world! I’m telling you guys. But it’s, yeah, I feel lucky every day I do any voiceover whatsoever. But when it’s something that’s fun, and successful, and the product is something that you can be proud of to be associated with, and it really touches people.
JD: And you have camraderie with the people you work with. It’s rewarding. It’s a rewarding day.
TK: And you realize most people don’t have that at their jobs, at all. It’s just the, you know… most people live lives of quiet desperation.
OO: Definitely don’t go home complaining about my bosses.
JD: Yeah, no. Not me.
OO: Except this guy.
JS: Except this guy. Heeeeeey!
AM: Heeeeeeeey. Punchline! <laughter>
JD: He’s got it. He’s gotta deal with that.
TK: He’s thinking, like, you know… two years down the road. <everyone laughs> We just come in to do our little booty calls “all right, that’ll do it, now on to the next one.”
JD: He’s the one with all the forethought.
TK: <laughing> We get to do voiceover booty calls.
JD: <laughing Voiceover bootycalls. <sexy voice> What’s going on? Yeeeaaaaah.
TK: He actually has to be emotionally involved. <laughter>
AM: I don’t like this metaphor. <everyone laughs>

Q: I have a question from a nine-year-old. A nine-year-old whose name is Finn. He has a question. As Finn keeps getting older, how are you coming up with new ideas? Where is the storylines gonna go? His voice is changing. You know, what’s going on? <a couple people start talking> Finn. Let’s talk to Finn.

JS: Uh, yeah, um… that’s one of the shorts actually. So they’re doing a, little like, Adventure Time digital shorts and stuff. And one of them we saw last night, there’s a little part where uh… I’m not spoiling anything, it’s just a funny little thing. But basically Finn’s like sleeping in the morning and like BMO’s rolling in doing whatever. BMO goes up to Finn and you see, like, a little… a little kind of like first hair of a mustache growing on Finn and BMO just plucks it. He goes “Forever young.” <everyone laughs>
JD: Awwwww.
OO: He wakes up and goes “oh, my lip hurts again.” <laughter> So BMO’s been doing this for awhile. <more laughter>
TK: <using Ice King voice> Send BMO over to my place. <everyone laughs> He can pluck my beard out one strand at a time.
JS: Luckily though, Finn does age throughout the show. We have been doing that. I think that’s pretty cool. You definitely see that especially as it goes on. You see kind of the relationship stuff that he has to go through and all that.
AM: But yeah, that kind of determines what kind of stories we tell now. Because when he was 12 we had to tell a different kind of story, because he was so young.

Q: There’s no, I mean… you guys are very popular, so, where is he gonna stop aging?

Q: I recently saw the Barry Crimmins documentary that you were in.

Q: Really? Yeah, well, we’re in the press, so we get the review copies. I didn’t know you knew Bobcat. Were you originally going to be a standup comedian?

TK: Yeah, you know, we were teenagers. I was working in garage bands and doing standup in bars when I was like 15 / 16 years old.

Q: I never knew any of that. That’s crazy.

TK: But yeah, you know, Syracuse is not really like a showbiz hotbed of showbiz. So it’s like, we were just trying to figure out… we gotta get out of here. There has to be a way to make a living in a creative way that’s not cutting meat, or working at the Chrysler factory, or any of the other kind of Bruce Springsteen-y jobs that are available here. <DiMaggio laughs loudly> Saying you wanted to make a living doing something creative was insanity in a place like that. “Nice fantasy, but what are you really gonna do?” So yeah, I think we tried standup, we played in bands, we did sketch groups you know… the best part about being in kind of a small town is you can just kind of take over. You know? There’s no Improv, there’s no Groundlings, you just go “Alright. We’re 16 years old and we’re taking over.”
Q: The final cut of the movie is great. It tugs at your heartstrings. It’s amazing.