According to series creator Pendleton Ward, Adventure Time takes place on post-apocalyptic Earth.[1][2] The Earth has gone through at least two major catastrophic events: The Great Mushroom War and an unknown event which resulted in a large, continent-sized crater in the Earth's surface. Earth is first seen in "The Real You" but the first time the Earth is referenced within the series is in "Holly Jolly Secrets Part II" when Simon Petrikov (Ice King) mentions that he obtained his crown in Scandinavia.

In episode "Five Short Graybles," a holographic visual of Earth is seen rotating (see image in sidebar) much like a desk globe. The Earth is shown again In "The Lich" when the Enchiridion opens a map which Jake enhances to show the solar system.

The first time the Earth is actually mentioned by name within the series is in "Sons of Mars," when Magic Man explains how the Martian transporter works.

The Earth is now the second planet in the solar system because Mercury was destroyed by the expansion of the Sun sometime prior to the events of the show. 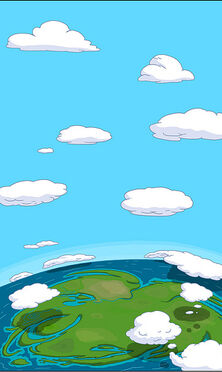 At some point a large portion of the Earth became missing. Although how this occurred is unknown, in "I Remember You" and "Betty" the Ice King is shown to have a drawing of an intact Earth with a giant meteor heading towards it. However, this may also be referring to the asteroid in the episode "Wizard."

Assuming the rotating globe (see image in sidebar) depicts the Earth as it is during the show, it can be seen that there are four continents left on the planet, but only the continent that the Land of Ooo resides on is known to have been featured in any episode to date.

The Land of Ooo is the main setting of Adventure Time and is the home of Finn and Jake along with the majority of their friends and foes. It is divided into different kingdoms as well as independent regions.

Additionally, there are locales which are not physically connected to the Earth, such as the Cloud Kingdom, the Nightosphere, the Crystal Dimension, Lumpy Space, and the Dead World.

Despite the apocalyptic events in the past there remains a diverse range of life on the Earth, much of which now displays signs of sentience (e.g. talking insects, animals, and plants); however, due to the war, most of the planet's current inhabitants have undergone some form of mutation due to the radiation from the Great Mushroom War[2] including beings which were previously not living creatures. Additionally, there are sentient non-living being such as the robot BMO.

Most of the inhabitants of Ooo speak English, but other languages, such as German and Korean, are also spoken by a certain individuals and entire species.

It is inferred that a great amount of scientific and technological knowledge has been lost due to the Mushroom War, such as when Jake claims in "The New Frontier" that rockets have not been re-invented yet. Despite these setbacks, there have been great advances in science and technology. Examples of this include holographic displays, the ability to design and create life (e.g. the Earl of Lemongrab), genetic splicing and mutation (e.g. Princess Bubblegum creating the perfect sandwich), and an immortality elixir used to bring long dead Candy People back to life.

Due to the Great Mushroom War, magic runs rampant across Earth[2]; though the Ice King's magic crown is evidence that the existence of at least some magic predates that event.

Merging magic with science seems to happen frequently in the show and the two have been shown as interchangeable with scientists using magic (e.g., Princess Bubblegum creating the perfect sandwich in "Five Short Graybles") and spell-casters using science (e.g., Ice King creating a magic computer virus in "A Glitch is a Glitch."

Earth in the viewer on the right hand side

When the map zooms in, one can see the Earth. 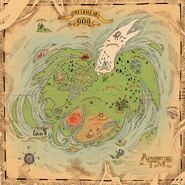 A box containing a picture of the Earth and a meteor.
Add a photo to this gallery

Retrieved from "https://adventuretime.fandom.com/wiki/User_blog:KADC/Earth_revision?oldid=817841"
Community content is available under CC-BY-SA unless otherwise noted.