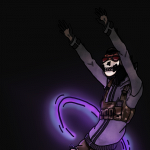 I will be on this wiki rarely due to school. I may be able to edit during my free time, which will be quite little due to my 3 AP courses (AP Calculus, Biology, and Language.)

As you can tell by my username, I am something of a Halo fan.

(In fact, I used to edit a lot around the Halo Wiki.)

I'm just another sixteen year old highschooler dude that really likes the show this wiki is dedicated to. I'm practically a Grammar Nazi, so don't be surprised if I start to fuss over things like Beemo's gender.

...in my opinion is one hell of a breath of fresh air. I know that it something like Spongebob Squarepants, but better in the sense that the characters are much more relatable (in terms of personality and personal plights, on occasion). I think the main thing that this show has going for it is the funny [and random] interactions between the characters, its very cute moments, and the art style, which is simple, yet clean. The show overall is simply wonderful, and always puts a smile on my face, big or small. I know Pendleton Ward knows what he is doing, but I hope he doesn't let the show become some cookie-cutter crap that rakes in a massive amount viewers yet has lost its original vibe.

I support FinnxBubblegum. There is simply no other for Finn (unless Marceline changes her mind or something else whacky.)

Peppermint Butler (He's hilarious and awesome; can't wait for the episode of his life story!)

Magic Man (He just seems really upbeat about his jerkiness.)

Season 2: It Came from the Nightosphere, The Eyes, The Chamber of Frozen Blades, |*The Real You*|, Video Makers, |*Mortal Folly*|, and |*Mortal Recoil*|.

(I can't rank the following songs; they're all just wonderful!)

...Oh, Fionna. (It's flipping sweet in every sense of the word, and NPH is an awesome dude.)

Fry Song (You can't dislike it!)

Spartan-112: The Master of Puppets

AT Fanfic (TO BE POSTED ON FANFICTION.NET)

*If I do ever find the time, I will try to complete an AT fanfic. For obvious reasons, I won't post it here, but I'll post a link to the page on fanfiction.net as soon as the first chapter is up.*

*The basic premise of this thing will concern Finn's conservation status as the last human in Ooo, and will relate heavily to the Mushroom War (which is something I have seen only in one fanfic on that website, titled "The Last Human"; yet it does so only briefly.) I'd like to say more, but I'll let it be a surprise. ;).*

*Actually, I've been working on a different sort of fanfic; it's a bit less deep in nature in comparison to the above idea, but I guess I can use the above as a backstory for a later thing and will definitely be alluded to, as the above is somewhat developed, already. Anyway, the new fanfic I am actually composing concerns the Lich and Finn four years after their first encounter. First chapter's done, maybe I'll post it here like User:BNSF1995 has, as well as at fanfiction.net under the username "Vector117".*

If I were to be drawn in the Adventure Time style.
Add a photo to this gallery

Retrieved from "https://adventuretime.fandom.com/wiki/User:Spartan--112?oldid=534657"
Community content is available under CC-BY-SA unless otherwise noted.