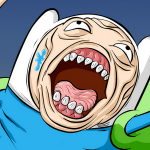 Hello, my name isn't Alexi Cographer. I am a high school student in year 9. I discovered the original short of adventure time around grade 5-6 and was thrilled that it became a proper show. I love Adventure Time and have fun watching through every series over and over again, learning how to draw the characters and trying to find the snail.

Retrieved from "https://adventuretime.fandom.com/wiki/User:So_Spice?oldid=702616"
Community content is available under CC-BY-SA unless otherwise noted.