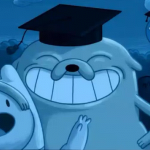 Hello and welcome to my profile person!

I am just a random person with Asperger's Syndrome who loves animals, drawing, and lots more.

When Adventure Time came out, I thought it would be just another dumb cartoon. When I started watching it (the first episode I watched was Ocean of Fear), I loved it a lot. This is where Jake instantly became my favorite character. I discovered this wiki sometime in a year or two before I created my account on September 2013 (this was when the edit feature was still available for anonymous users). Before I joined, I made a few edits which were pretty cringy (I will not say who I was though). September 23, 2013 is when I became an actual editor finding grammar mistakes and some unnecessary stuff (this was months after they disabled the edit feature for anonymous users).

I've been a Discussions Mod for a year now and I have also been promoted to Admin as of recent.

Retrieved from "https://adventuretime.fandom.com/wiki/User:AquaSeashells?oldid=784315"
Community content is available under CC-BY-SA unless otherwise noted.