Skyler Page
Somvilay Xayaphone
"Up a Tree" is the fourth episode in the fifth season of Adventure Time. It's the one hundred and eighth episode overall.

Finn goes on a bizarre adventure up a giant tree to retrieve a throwing disk he and Jake were playing with.

The episode starts off with Lady Rainicorn walking in the Grass Lands towards Finn and Jake. As they are walking, Lady Rainicorn comments that the wind and weather are perfect, taking the beautiful day in. After a few paces, Jake sets down a picnic blanket, which Lady Rainicorn (now noticeably pregnant with Jake's puppies) rests on. Finn then digs through the picnic basket, bringing out food as both Finn and Jake exchange ooh's and aah's. As they start to take things out of the basket, Finn finds a Frisbee, which he refers to as a "throwing-and-catching disc." He and Jake interact as if he were a regular boy with his regular dog. When Finn does his "perfect throw," the wind carries it to the top of a tall tree. Jake offers to grab the disc for Finn, but he refuses and tries to get it himself.

Finn tries to climb up the tree with his bare hands but fails and meets a porcupine. It offers for Finn to sit on him, telling him the shock would cause him to jump up to the top. Finn refuses and the porcupine does it by force. Although the porcupine's plan failed, Finn takes out the needles stuck in him and uses them to climb up the tree. He gets tired and rests on a branch. A squirrel then offers him an apple to energize Finn. Finn refuses, but the squirrel stuffs in the apple by force. The apple was apparently cursed and shrinks Finn.

Finn continues to climb up the tree with the porcupine needles, but they eventually break, so he takes another break. Jake stretches up to him and notices that Finn has shrunk. He tells him that he's going to walk Lady Rainicorn home. After Jake leaves, Finn encounters the squirrel again and follows him into the tree after being ignored. He then hears the whispers of the animals. He sneaks in to see the animals discussing how to get rid of him and a large pile of objects with his Frisbee on top. In shock, Finn shouts, revealing himself. The animals then knock him out and put him in a jail cell in the tree.

Finn wakes up in the cell with the squirrel guarding the cage. The squirrel talks about the good and bad of living in the tree and living with the rules. He then says that he wishes to fly away but the other animals say he is not a flying squirrel, and that he would run away if only he had "a buddy to break out with." Finn easily escapes through the cell bars and teams up with the squirrel to escape. The squirrel lowers Finn to his Frisbee as the animals chase them out of the tree and onto a limb. Finn throws the disc planning to ride on it, but it flies upward again. As the animals catch up, he pushes the squirrel off the branch and jumps on his back. As they are falling it is revealed that he is a regular squirrel and cannot fly. Just before they reach the ground, the Frisbee flies underneath them, catching them. On the disc, they ride across the Grasslands, past Lady's house, where Jake is making food for Lady. Finn calls out Jake's name, and he watches Finn and the squirrel riding on the Frisbee. Jake says that it's a "perfect throw" as the Frisbee flies into the sunset. 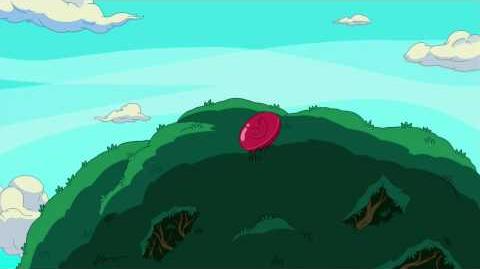 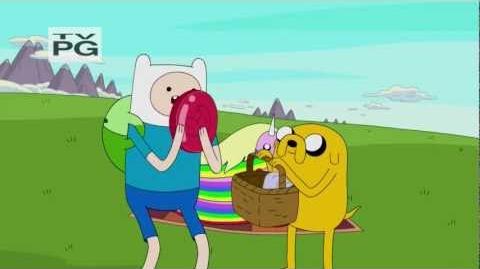