"Ultimate Wizard" is a rank bestowed upon wizards by Bufo to all who have completed all the trials to receive a full set of wizard powers. Once this rank is obtained, all of the acquired stars on one's wizard robe vanish, and are replaced by one large star in the center of the robe. Because wizard powers are stored in the robe of the wizard student, the rank of Ultimate Wizard is also likely bound to the robe.

To become an Ultimate Wizard, one must have all the other wizard powers and then take the "Pledge of Ultimate Responsibility." Finn takes the pledge without listening to its terms, so they are never explicitly stated on the show (though Bufo warns multiple times that there may be "ramifications"). After Bufo gives Finn the rank of Ultimate Wizard, they order him to stop a meteor that has been heading for the school for 847 years. Bufo states that this is what Finn signed up for by taking the "Pledge of Ultimate Responsibility." However, after Finn accuses Bufo of tricking him, they admitted that no one would ever volunteer to do it on their own. 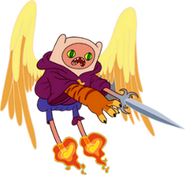 Finn in his ultimate wizard form

Finn as an Ultimate Wizard
Community content is available under CC-BY-SA unless otherwise noted.
Advertisement