"Two Swords" is the fourteenth episode in the eighth season of Adventure Time. It is the two hundred and thirty-ninth episode overall.

Finn and Jake contend with a mysterious, but familiar, new being.[1]

Following "Reboot," the injured Finn, Jake and Susan have been transported to the Candy Kingdom hospital. Due to the loss of Finn's arm, Princess Bubblegum gives him a new bionic arm, which she had been working on since Finn lost his arm the first time. She tells him to try not to blow it up so fast this time, to which he replies, "We'll see." Finn also expresses his feelings of indifference towards the loss of his arm. When prompted to tell Princess Bubblegum about the "Grass Guy" he encountered earlier that morning, a flashback occurs:

"Grass Guy" approaches Finn to talk (though his speech sounds muffled) but Finn yells for him to stay back, fearing "Grass Guy" will hurt him like he hurt Susan. "Grass Guy" realizes Susan is injured and runs towards her, causing Finn to give chase. Finn and "Grass Guy" end up arguing, and the latter gradually begins looking more like Finn and speaking with clarity. "Grass Guy" asserts that he is Finn Mertens, "a hundred per cent hero." Jake tells "Grass Guy" that Finn is the real Finn, and calls him a grass demon, to which Finn agrees, leading to the both of them taunting "Grass Guy" to show them his "true demon form." "Grass Guy" appears genuinely bewildered and runs off. The flashback ends.

While Finn and Jake are still at the hospital, "Grass Guy" is seen going to the Tree Fort. Upon seeing him, BMO is frightened and hides. "Grass Guy" makes himself at home, looking through Finn and Jake's scrapbook of photos. He appears to remember exactly what had happened on the day the photos were taken. However, when he compares his green grassy hand next to a photo of Finn's human hand, he starts to question if he is really Finn. He has a flashback to the day Finn had been fighting Bandit Princess in "I Am A Sword."

A smaller Finn is seen living in the Finn sword, wherein there appears to be substantial space for habitation, along with a small chair and some food and water. Sword Finn looks out of the sword as the fight takes place. He simultaneously yells the words the regular-sized Finn does, suggesting both Finns are of the same consciousness.

Suddenly, the grass sword pierces through the Finn sword, and the interior goes dark. Grass from the grass sword falls onto and buries Sword Finn. A small, green, octopus-looking creature emerges, humming a song while producing a sticky spiderweb-like goo. With the voice of "Grass Guy," the creature says that it is "a curse, an emissary from beyond, some kind of grass octopus-spider." Sword Finn calls it a grass demon. It wraps Sword Finn in goo, forming a cocoon around him. An unknown period of time later, the interior of the sword is filled with green cobwebs, and the cocoon appears hardened. Both the Grass Demon and Sword Finn express the desire to get out. The Grass Demon tells Sword Finn to let it do the talking once they find the chance to escape. The flashback ends.

At the hospital, Princess Bubblegum tells Finn that "Grass Guy" is not "an alternate reality evil doppelgänger" as he thinks, but is just Finn. However, he is still slightly unconvinced. A distressed phone call from BMO interrupts their conversation, and Finn and Jake swiftly go to BMO's rescue. In the treehouse, a record is playing in the middle of the trashed living room, where plates, vinyl records, and picture frames are seen to have been smashed. "Grass Guy" is pouring Jake's breakfast syrup all over the floorboards, lamenting to himself that he can't get anything right. As Jake reprimands "Grass Guy," Finn rummages through the freezer for a Finn Cake, which he offers to "Grass Guy." Upon sniffing the Finn Cake, deep inside "Grass Guy"'s body, a flower blooms. He then realizes what a mess he has made in the treehouse, and expresses uncertainty towards who he really is. Finn reassures and embraces him.

Later that night, "Grass Guy" is shown sleeping on the grassy roof of the Tree Fort, his fingers moving in a drumming motion on his chest. A faint image of the Grass Demon appears, its tentacles moving in the same rhythm, and it briefly hums a song about waiting before fading out. 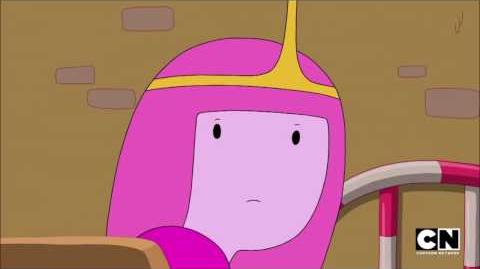 Two Swords storyboard panel
Add a photo to this gallery

Inside the Finn Sword

Retrieved from "https://adventuretime.fandom.com/wiki/Two_Swords?oldid=821951"
Community content is available under CC-BY-SA unless otherwise noted.