"Come Along With Me (cameo)
The two-headed ducks are animals that appear outside of the Tree Fort in the "Adventure Time Theme Song" and in various episodes. Radiation from the Great Mushroom War that befell the post-apocalyptic Land of Ooo may have mutated it.

One also appears in the episode "The Witch's Garden" outside of the Tree Fort. In "Her Parents," multiple two-headed ducks appear, suggesting they are a species. Because two-headed ducks only appear around the Tree Fort, one can assume that they live there or have a nest somewhere nearby. It usually only appears in the background, but it has a few close-up appearances. It also appears in "Holly Jolly Secrets Part II" during the annual homemade clip party Finn and Jake host. Jake sits beside the duck wearing a sweater.They also seem to like making out with their heads. 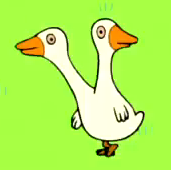 Two headed duck ghost in "Ghost Fly"
Add a photo to this gallery
Retrieved from "https://adventuretime.fandom.com/wiki/Two_Headed_Duck?oldid=789157"
Community content is available under CC-BY-SA unless otherwise noted.