Steve Little
Turtle Princess is a princess who is also the head of a library in the Land of Ooo. She is considered a registered princess in "Princess Day."

Her debut is in a cameo in Ice King's Imagination Zone in the episode "What is Life?"

She appears again in "Loyalty to the King" as one of the many princesses who is interested in the Nice King (Ice King). However, he doesn't want to marry her, so on her way out, Nice King tells Finn and Jake to tell her she's been rejected.

In "The Real You," she is at the library Finn and Jake go to so they can prepare for Princess Bubblegum's science barbecue. She is later mentioned in conjunction to the library in "Holly Jolly Secrets Part I," when one of Ice King's confessionals mentions that an attempt to take her both lead to Finn and Jake's stopping him and having his library card revoked.

In "Paper Pete," Turtle Princess is constantly trying to keep control of Finn's volume in the library as he tries to help the Pagelings defeat the Moldos. She ultimately confronts Finn but is embarrassed to see him take off his shirt. She then blushed and ran off to continue her job of stacking books.

She is one of the many princesses in the episode "Princess Monster Wife" to have her body parts stolen, showing that she is one of Ice King's favorite princesses. She has a part of her head stolen.

She is also one of the toys that appear in "All the Little People" ironically playfully spanking Xergiok, the Goblin King. However, as the time goes on, she goes corrupt and painfully spanks Xergiok.

In the series finale "Come Along With Me," she meets Gunter, who has become the Ice Thing. The two eventually marry. It is also hinted that she wrote a book titled "Royalty of Ooo," signed by "T. Princess," which Shermy and Beth used to locate the future King of Ooo.

Turtle Princess looks like a turtle with long yellow hair, however she dyed it black in "Blank Eyed Girl." She has a crown similar to that of Princess Bubblegum and Slime Princess, but with a green gem. She has a very deep voice (although she sports a much higher voice in "The Real You"). She also has a dark green shell and brownish-green skin. Her eyes appear to be slanted (they can be seen open in some episodes).

Turtle Princess is a princess who works at a library. She is very strict about her rules and wants everything to be very quiet because she enjoys her peace and silence. Because of this, she is always shushing everyone who makes noise in her library, even if it's barely any noise at all. Outside of work, Turtle Princess is a loud and rambunctious, outgoing person. She acts very similar to her best friend, Lumpy Space Princess, acting like a stereotypical teenage girl, texting and shouting out phrases like "Hey, gurrrl!" and things like that. 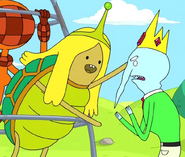 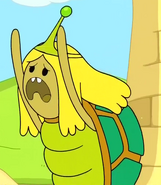 Turtle Princess blushing while seeing Finn without his shirt 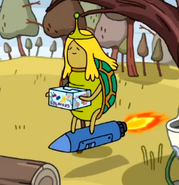 Turtle Princess on her rocket delivering fruit pies to LSP

Add a photo to this gallery
Retrieved from "https://adventuretime.fandom.com/wiki/Turtle_Princess?oldid=821977"
Community content is available under CC-BY-SA unless otherwise noted.