Finn must travel to Lumpy Space to cure Jake of the lumps after he is bitten by Lumpy Space Princess at Princess Bubblegum's Mallow Tea Ceremony.

At Makeout Point they meet a trio of Lumpy Space people (Monty, Lenny, and Glasses) who hate being lumpy and use a sphere (the antidote) to make themselves look smooth. They were about to hand the antidote to Finn and Jake when Lumpy Space Princess showed up and insulted them calling them 'posers.' Finn yells at Lumpy Space Princess for causing things to go bad. Feeling offended she yells at Finn saying that she is just trying her best and she storms off headed to promcoming, and suddenly Jake becomes fully lumpy and he leaves with Lumpy Space Princess. Finn is disappointed in himself for being unable to save Jake and then explodes with rage saying he will destroy Lumpy Space. The posers are drawn back by Finn's hatred of lumpiness and give him the antidote.

Finn has to find a way to get to promcoming, but the posers tell Finn that he will fall into the Lumpy Abyss since he is a smooth person. Finn realizes that in order to make it, he has to be lumpy, so he makes the posers bite him and the multiple bites begin to 'accelerate the lumpification process'. He crashes into the promcoming building and sees Lumpy Jake dancing. Finn tries to make Lumpy Jake use the antidote, but due to Jake's new lumpy behavior, he refuses, just as Finn finally becomes fully lumpy. Lumpy Finn begins to leave with the antidote but Lumpy Jake fights him for it. Eventually, Jake accidentally sits on the antidote and becomes normal again. Lumpy Finn also refuses to sit on the antidote and starts to run away but runs into a large lumpy space person and loses consciousness. He wakes up sitting on the antidote, returned to normal. Finn apologizes to Lumpy Space Princess for yelling at her and Lumpy Space Princess tells them that he and Jake can make it up to her by dancing one last dance with her. Jake responds in a lumpy voice, pretending he still has the lumps. But Jake says he is kidding, and so they dance.

This episode was heavily censored in Australia 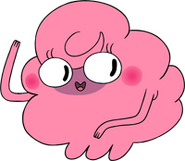 Princess Bubblegum drank too much tea.

"The antidote is right there at Make-out Point."

"You think I want to make-out with you?!"

Finn guilts LSP for the SP didn't give the antidote...

but regret, believing he should forgive her nature.

Affect the body and mind of the infected 3/4.

Finn became angry due to not being able to save Jake.

Almost-lumpy Finn try to give the antidote to Jake.

But he refused due his Lumpy pride.

Lumpiness process is about to consume Finn.

Now that Finn doesn't want to, Jake wants the ball.

Now Jake try to give the antidote to Finn...

LSP forgives him, by dancing a last dance with her. 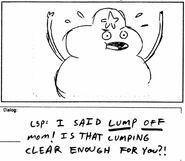