Thurop Van Orman
Tree Witch is a humanoid character in the Land of Ooo in Adventure Time. She appears in "To Cut a Woman's Hair," where Finn and Jake try to help the witch cover her bald spot.

Tree Witch has the appearance of an old humanoid woman. Her skin resembles that of tree bark, her hair resembles foliage, and her nose looks similar to a twig. She also has emerald green and black eyes and a wig made from Finn's hair. Before receiving Finn's hair, the witch had brownish-gray hair only on the sides and back of her head. Her clothes appear to be tattered brown cloth with small patches of dried leaves. At the end of the episode, her lips are splattered with Princess Bubblegum's hair because she popped a bubble.

The Tree Witch is very insecure about her physical appearance, especially regarding the "bald spot" on her head. She usually disguises herself as foliage and only reveals herself after hearing that Finn and Jake are heroes. When Finn agrees to help cover her bald spot with princess hair, the witch asks that he not tell anyone why he requires it as she does not want anyone to know about her balding problem. Tree Witch believes that she will be able to be comfortable with herself once she covers her bald spot.

Like most witches in Ooo, Tree Witch is evil. She demonstrates this when she blackmails Finn to get her princess hair by slowly sucking Jake into her "bottomless bottom." She does this casually and without much thought, which shows that she is fine with killing others in order to fulfill her own needs. In addition, after receiving beautiful hair, Tree Witch goes to use it for evil.

Tree Witch has the ability to transform her body into different kinds of plants. She can manipulate objects with psychokinesis and can create a magical shield to protect herself. She also has the ability to swallow things whole with her "Bottomless Bottom."

She has a really big bald spot (which she refers to as a "balding problem") and wants princess hair as a wig so she can be beautiful. This causes Finn to tell her that he and Jake only help people in danger. She then uses her psychokinesis to drag Jake under her and sits on him, threatening to suck him into her "bottomless bottom" unless Finn gets her some princess hair. Finn goes around to some of the princesses he knows, wanting to get them to cut off some of their hair. He returns with Princess Bubblegum's hair, which she rejects because it turns out to be made of bubblegum. Finn gets mad and tells the witch she will never be beautiful because she's ugly on the inside. In the end, Finn takes pity on her and gives her his long blond hair. She then declares she will use his hair for evil, then promptly trips on the hair and falls down, possibly fracturing a branch.

In Rock Bandits, she is shown to have the ability to play her nose like a flute. 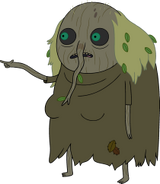 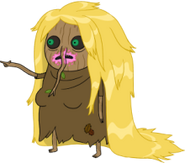