Trami is one of three prominent members of the Destiny Gang. His only appearances so far are in "Finn the Human" and "Jake the Dog."

He wields a giant hammer, and he has big pink hair that slightly resembles Prince Gumball's. He also wears a mask, somewhat similar to the Zorro mask. One side of his pink shirt slouches over, revealing his shoulder.

Trami with his hammer 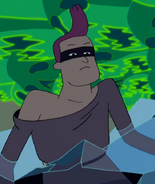