Toronto is a dog and the King of Ooo's partner-in-crime, who first appears in the episode Gold Stars. He was originally set to appear in Apple Wedding, but the scene was deleted.[1]

Toronto is a Shiba Inu, and so displays traits such as a curled tail. However, due to his shortened face, atypical brown coloration, bushy tail, and round ears he is commonly mistaken for a squirrel (His species is more clear in earlier designs with him displaying a more recognizable yellowish coat) .Most of his fur is dark brown with the exception of his mouth and belly, which are creamy white. Like most dogs in Ooo, Toronto is bipedal with thin arms and legs. He also has eyes similar to a lot of animals with the black on the outside and white on the inside similar to Jake or Lady Rainicorn.

Toronto works closely with the King of Ooo and is willing to commit crimes with him for personal gain. In Gold Stars, he uses Sweet P to distract Candy People so that he and the King of Ooo can rob them. Toronto is also willing to take care of Sweet P and burn down his mother's orchard when the boy discovers the dog's true nature.

Toronto tends to look out for himself; after the King of Ooo was melted in The Dark Cloud, he was last seen sneaking out through a crack in the Candy Kingdom castle with as much treasure as he could carry.

In Son of Rap Bear, Toronto tricks Flame Princess into signing a contract for a rap battle with Son of Rap Bear with the Fire Kingdom as the prize. However, even though he sets himself up as the judge, Flame Princess' hardcore battle rap wins over the entire audience and he is trampled by them even as he attempts to declare the defeated Son of Rap Bear the winner.

Toronto as he appears in the deleted storyboard for Apple Wedding. 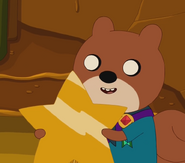 Toronto and King of Ooo in Gold Stars.

Toronto pictured with King of Ooo on bulletin board.