Tom Kenny is an American actor, voice actor, and comedian. He currently provides the voice of the Ice King (also as "Simon") and has done voices for numerous other characters on the show, such as Crunchy. He is best known for voicing SpongeBob SquarePants on the show of the same name, Dog of CatDog, Carl on Johnny Bravo, Lumpus from Camp Lazlo, Heffer Wolfe on Rocko's Modern Life, Starscream on Transformers: Animated, Eduardo from Foster's Home for Imaginary Friends, the narrator and the Mayor of Townsville from The Powerpuff Girls, Mumbo in Teen Titans, Plastic Man from Batman: The Brave and the Bold, and Rabbit in the Disney movie Winnie the Pooh. Tom Kenny also does the voice of Doctor Two-Brains in Wordgirl, whose laugh is identical to Ice King's. He has also done Wheelie and Skids from Transformers 2: Revenge of the Fallen, Spyro the Dragon in Spyro 2: Ripto's Rage!, Spyro: Year of the Dragon, and Spyro: Enter the Dragonfly, Cupid in The Fairly OddParents!, Nute Gunray in Star Wars: The Clone Wars, Raimundo Pedrosa from Xiaolin Showdown, Gibson from Super Robot Monkey Team Hyperforce Go, H.U.E. from Final Space, and Iron Man, Captain America, Colossus, Juggernaut, MODOK and Sentinels from Super Hero Squad, as well as several voices in Uncle Grandpa, Codename: Kids Next Door and Talking Tom and Friends. He also voiced Teslo, Seismo, and Flain in Mixels.

Tom Kenny at the Nickelodeon office 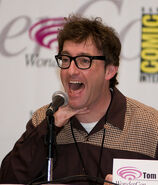 Tom Kenny with the iconic SpongeBob

Tom Kenny: "Still Me. Still Not Tweeting. Busy."
Add a photo to this gallery
Retrieved from "https://adventuretime.fandom.com/wiki/Tom_Kenny?oldid=823767"
Community content is available under CC-BY-SA unless otherwise noted.