"Time Sandwich" is the thirty-third episode in the fifth season of Adventure Time. It's the one hundred and thirty-seventh episode overall.

Finn and Jake must decipher Magic Man's riddle in order to take back what he stole: the most delicious sandwich Jake has ever made.

The episode starts out with Finn and BMO playing Finger Spread with blindfolds on. BMO wins the game. Jake comes in the room with groceries and tells the two of them to stay quiet while he gets into the "zone." He creates a sandwich that consists of cream cheese, dill, pickles, boiled eggs, cucumbers, tomatoes, onions, sous-vide meat, bacon, a bird from the window, tears (for salt), and lobster soul. Announcing it as the best sandwich made, Jake asks Finn and BMO if they want some, but Finn declines, saying he is cool with Jake eating the whole thing.

Just before Jake eats his sandwich, Magic Man appears and steals it away. Jake demands his sandwich back, and Magic Man says that he can only get it back by solving his riddle:

The only way forward is down.

Then, you'll see, the wetter, the better.

Jake complains that the "riddle" was more like wordplay at best, but Magic Man tells him that trying to "come up with something on the spot" is hard before "savouring the moment" and crashing backwards before creating a large bubble-shaped time field around him. Jake initially thinks that the time bubble froze Magic Man and the sandwich, but Finn tells him he is just moving in "super-slow motion." Finn points at Magic Man in the bubble, and they see a small drop of saliva dripping off his lip. They decide to try and get Jake's sandwich back before Magic Man hits the ground, which they assume is when he will take his first bite.

The two of them look inside the bubble, and in super slow-motion, they say hi to each other and leave. They then ask BMO how long they were in there. When BMO says 5 hours, Finn and Jake are in shock, and they look at the bubble again. Magic Man is about halfway from the ground. BMO comes up with a plan to retrieve Jake's sandwich (which in reality is a plan to make a skateboard video) and ends up getting trapped in the time bubble as well. Jake reacts by saying that BMO lied to him. Finn decides to call Princess Bubblegum while Jake tries to make another sandwich.

Princess Bubblegum says that the time bubble is made up of molasses-based bonds that will slow down anything inside as long as the molasses is at room temperature, and tries to use her "molasses warmer" to "get things moving." The "molasses warmer" enters the time bubble, but the explosion is also moving in slow motion, therefore making it useless. Dumbstruck, Princess Bubblegum calls Marceline over to try and help. Jake sadly returns, unable to make another sandwich, and meets up with the rest of the group as Marceline reveals that her plan is to turn into her demonic form and elbow drop into the bubble (leaving her trapped inside as well). Jake decided to speed up the grieving process by lighting up candles made with the bacon fat from his sandwich earlier. Finn tries to comfort him by calling someone else, but Jake stops him, telling him that it is over and that he never felt as sad as he does now, and walks into the time bubble while moving normally.

Finn points out that Jake is not slowing down in the bubble, and that being sad was the answer to the riddle, saying that 7:20 is sometimes called "a sad face." Jake starts to get frustrated (saying that nobody says that 7:20 is a sad face), but is reminded by Finn and Bubblegum that he needs to stay sad in order to get his sandwich back. Jake runs towards Magic Man to retrieve his sandwich but starts to get happier as he gets closer, slowing him down. Jake tries to be sad again by imagining his funeral but ends up getting angry because he imagines Lady Rainicorn falling for Mr. Cupcake. Snapping out of his fantasy, he re-imagines the scene with Mr. Cupcake talking to "Jake" at his gravestone. He "talks" with Mr. Cupcake, saying that he respects him and how he wants him to take care of Lady Rainicorn and his children if he's dead, and ends up sobbing over their relationship which helps him reach his sandwich and end up punching Magic Man, destroying the time bubble. With the bubble gone, Magic Man hits the ground, gets elbowed by Marceline, and has his face run over by BMO's skateboard. Jake continues crying while celebrating his victory, and the episode ends with Jake finally taking a bite of his sandwich, saying how it is "so, so, so good.", while crying and rolling around in the grass. 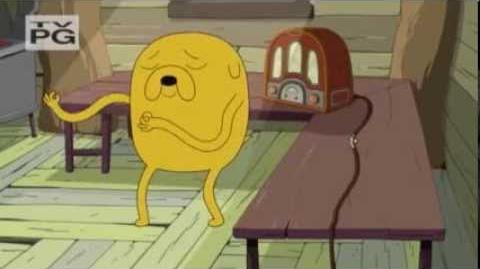 Another knuckle sandwich for Magic Man