Vincenzo Rauso ("My Two Favorite People")
Collin Dean ("One Last Job," "Dentist" and Preboot)
Aryan Simhadri ("Together Again")
Tiffany Oiler is a character that makes his debut in the episode "My Two Favorite People." He is a friend of Jake and was a member of Jake's old gang alongside Gareth and the Flying Lettuce Brothers. In addition, Tiffany is jealous of Finn due to his close friendship with Jake. He tends to speak in long, nonsensical "threatening" monologues belied by his youthful voice. In "Dentist" Tiffany fell into the queen worm's mouth and was reported as "missing in action" by the ants. He returns in "Preboot" in the employ of Dr. Gross, who apparently rescued him from the worm's intestine and gave him a cybernetic arm, causing him to now bill himself as "Cyber-Tiffany." His loyalty to Jake (and to a lesser extent, Finn) leads him to sacrifice himself so the others can escape Dr. Gross, whose craft explodes shortly thereafter. Finn tells Jake Tiffany will be okay, but amends this to "probably" okay after the craft explodes. He is shown to have survived, roaming the wasteland with more cybernetic parts, in the montage at the end of "Come Along With Me."

Tiffany wears a pink shirt, blue shorts, blue socks, and brown shoes. He has a blond mullet. He also has a peach-fuzz mustache on his face. His skin is a pale aquamarine and he is short, with a size and build comparable to that of an elementary school child. He carries a hidden knife in his shirt.

Tiffany is obsessed with being friends with Jake and they both share a common interest in playing the viola. It is later explained that they are old friends, and that Tiffany obsessively waits for Jake to contact him to hang out again. Because of this, Tiffany is loyal to Jake and is willing to follow his orders. This is seen in "My Two Favorite People" where he is called on by Jake to make Finn and Lady Rainicorn jealous. He fought with Finn fiercely, but ran away whining when Finn spat on him. He vowed to have Jake as his best friend.[1]

Tiffany deeply longs for Jake to ditch Finn and be his best friend again, so they can be master criminals together, as explained in "Dentist." In the episode, he and Finn are partnered by ants to take down some worms threatening the ant colony that provides dental services for people in Ooo (Tiffany has lost most of his teeth after eating the Baker's Shard he and Jake's old gang stole in "One Last Job."). He develops a grudging respect for Finn, but cannot bring himself to save him when Finn is in danger of falling into a worm's maw, though he does decide against stabbing the helpless Finn, as was his first plan. 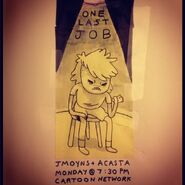 Promotional artwork for "One Last Job"

Title card for "One Last Job" 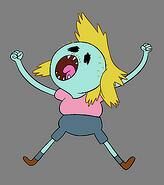 Jake and Tiffany playing the viola

Tiffany being beaten up by Finn 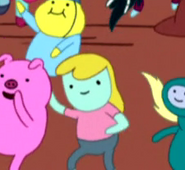 A Tiffany toy, seen in "All the Little People"

Tiffany yelling/arguing at and fighting with Jake