Sitting on the lumps antidote

"Trouble in Lumpy Space"
The lumps is a disease in the Land of Ooo. If someone is bitten by a Lumpy Space Person, they begin to turn lumpy until they are one of the Lumpy Space People. According to Lumpy Space Princess, the process follows "werewolf rules."

Symptoms of this change include the sporadic growth of uneven lumps all over the body and radical changes in opinion about anything from music to best friends. Once the lumpification is near complete, the infected individual starts floating like a Lumpy Space Person, and after the transformation is complete, the infected individual becomes full-on sassy.

The lumps must be cured by sunset or else the infected person will be lumpy forever. The disease can be cured by sitting on the lumps antidote, which is a small white sphere. While the antidote permanently cures a person infected with the lumps, a native Lumpy Space person turns smooth as long as they sit on it. In "Trouble in Lumpy Space," the antidote was owned by Lenny, Monty, and Glasses until they gave it to Finn. Finn soon cured himself and Jake, preventing them from becoming lumpy forever. 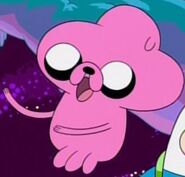