"The Visitor" is the twenty-seventh episode in the sixth season of Adventure Time. It is the one hundred eighty-third episode overall.

A dream leads Finn to a friendly civilization and a mysterious crash site.[2]

Finn wakes up on a hill, where he sees a crashed spaceship next to a Farming Village. Finn then walks towards it. Finn is visibly dehydrated and asks himself "Ugh... Where am I...?" He goes over to the Farming Village and kneels next to a small water tower and asks the Villager if he could have some of their water. The villager nods it's head and so Finn drinks the water and thanks him.

A voice begins to shout at Finn from the tree, a voice that Finn recognizes as his father, Martin. Martin starts to freak out but Finn comes up to the tree anyway. Finn's father start talking about how the Villagers will do anything for the "Tree Spirit" he has made up, and how he is using it to manipulate them into fixing his escape pod for him. When Finn notices that one of his arms is missing, he tells him about how he lost his arm from falling and then landing in a woodpecker hole. Finn tells him that back when Martin caused him to lose an arm, he had wanted to come and rip his father's own arm off as revenge, but definitely does not want to do so anymore. Martin then reveals that he had not actually lost his arm at all, and that he was hiding it in his shirt. He then attempts to embrace Finn, but he pushes him off immediately. Finn, outraged asks him if everything he says is a lie, to which Martin replies "not everything."Finn then asks him how he can tell the difference, and Martin says that he hopes he will never be able to. A bell is heard and so Martin and Finn leave the tree and go down to the villagers. The villagers are carrying a large part of the escape pod and struggling immensely with carrying it as they are so small. Finn sympathizes and asks Martin why he is making them do this for him, and he says that they love helping him as he is an old stranded man. He proves his point by petting one of the villagers, that then runs into his arm and cuddles it lovingly, while Finn watches, unconvinced.

Finn is still skeptical of the way Martin is treating the villagers, but Martin reassures him by telling him that they only need to get the last part of his escape pod and that will be all. They go down towards Martins spaceship and Finn says that it is very hot near his ship. Martin informs the villagers that the final piece is a steering wheel and that the villagers should go inside and retrieve it for him, to which they are reluctant to do. Martin encourages them by saying that the last one to enter the ship would break the tree spirit's heart. Finn is irritated by this and tells them that if they don't want to do it for him they do not have to, but one of the villagers says that it thinks it wants to. Finn is still annoyed, but Martin reminds him again that his is the last part he needs for his escape pod, and that he will make it up to the villagers with a party.

At the party, Martin wears what resembles a flower crown made of the villagers, and gives them lots of corn for them to eat and a fire to sit around. He is also drinking from their water supply, using it as a makeshift cup. Finn plays cool beats with his hands to entertain a small group of villagers that attempt to copy him, which Finn says is "cute." Finn asks them if they really do believe in the tree spirit and the villagers reply, saying that they do not exactly believe in the tree spirit, but they just like to help out. Martin comes over to them and most of the villagers walk away, but one of them remains and climbs up Finn's shoulder and onto his backpack to fall asleep. Martin sits down behind him, with Finn between his legs and asks if he has ever seen anyone sit the way he is sat at that moment. Finn says that he guesses he hasn't, and that he has a few questions for his dad, one of them being his birth and where exactly it took place.

Martin seems to be uncomfortable with the topic but tells him that he was born on a "banana boat" and that many of the sea creatures tried to eat and kill baby Finn, but they were always killed before they could touch him. He then goes on to say that Finn's mother was "okay" and that it stressed him out to talk about her. He then says that he was asked on a huge mission, a mission that he was unable to bring his son to, and that he had always planned to come back for him, but never managed to do so. He then shouts "LOOK OUT" and flips Finn over between his legs.

Finn wakes up to see that his father is not there, the villagers are splayed out in various parts of the field and groan that everything is ruined as they have become fat. Martin's Spaceship looks to be in a critical state, ready to explode, and so Finn looks for his father who is about to get into the escape pod. Finn asks if Martin is leaving, and informs him that the spaceship is about to blow up and kill all of the villagers. Martin is unaffected by this and goes on to say that it may or may not explode and that he has seen about a million things weirder than a spaceship not blowing up . Finn is annoyed and says that he will stop it from blowing up himself and before he runs off to do so, Martin tells him to flick the heat lever in the engine to stop it. Finn, enraged, asks why he did not tell him about the heat lever in the first place and Martin answers that he doesn't know in a garbled voice. Finn screams in anger and pulls a lever on his escape pod that sends him flying into the air. Finn grins and runs towards the spaceship, then crawls through the tight and very hot space to get to the lever. He tries with all his effort and is about to give up when the villager that had fallen asleep his backpack the night before awakens and climbs onto his shoulder, hugging Finns face. This seems to motivate Finn, and he gives the lever a last pull and it finally moves downward, stopping the heat. He emerges from the spaceship sweating, and waves back to the villagers when they wave at him from the ground. Finn then wears the villagers as a hat as he walks home, talking to himself about how it wasn't even a comet that he saw, and that his brain was weird. Finn then tells the villagers that when they get back to the tree house, they should let him do the talking. 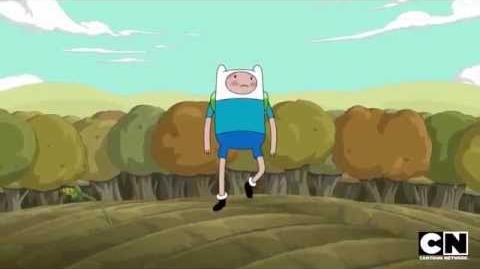 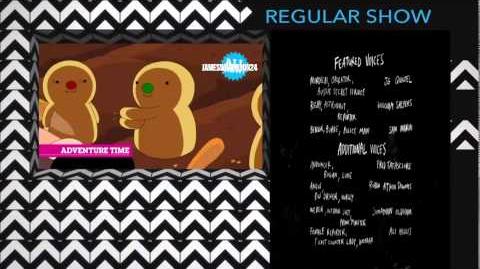 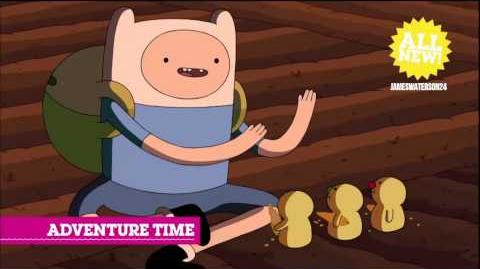 Promotional artwork
Add a photo to this gallery

Retrieved from "https://adventuretime.fandom.com/wiki/The_Visitor?oldid=765863"
Community content is available under CC-BY-SA unless otherwise noted.