"The Vault" is the thirty-fourth episode in the fifth season of Adventure Time. It's the one hundred and thirty-eighth episode overall.

When Finn starts sleepwalking and dreaming about the green Ghost Lady he filed away in his memory vault at the end of "The Creeps," Jake and BMO help him tap into his repressed memories to uncover a secret past.[1]

This episode begins with Finn in the kitchen late at night making a midnight snack, although the bowl he has is empty. Suddenly, Ghost Lady emerges from the floor and begins trying to grab onto him. Finn starts screaming as Jake and BMO wake up to check on him, to discover that he was only having a nightmare. Jake and BMO are not happy with Finn's recurring nightmares about the Ghost Lady, and try to think of a solution.

Jake tells Finn that in order to solve this problem, he must visit his "vault" and find out who the scary lady is, Finn remembers the vault as the place where he stores all the memories he can't handle, and Jake is not amused to find Finn does that consciously. Jake presses for Finn to go into his vault but Finn rather aggressively refuses. Later, Jake comes to Finn claiming BMO has a new game which is called Regression Simulator. But when he turns it on, it is actually a hypnosis that makes Finn enter his subconscious to visit his "vault" of repressed memories.

As Finn goes into his hypnotic state, he explains to Jake his past lives; which included a comet, a butterfly, a "thing," and the Ghost Lady herself. He then views the Ghost Lady's life, where her name is revealed to be Shoko, a one-armed common thief who steals items for "clients" in exchange for money. The scene continues with Shoko and her pet tiger accepting a job from the Bath Boy Gang leader to steal Princess Bubblegum's amulet.

Princess Bubblegum then requests Shoko's help on creating the first Gumball Guardians. Once the Gumball Guardians are created, Princess Bubblegum tells Shoko she has a surprise for her, ordering young Peppermint Butler to bring out a wooden box. Shoko opens the box to find a mechanical arm to replace the one her parents sold. Shoko starts to tear up and makes the excuse that she has to go back to her room.

He proceeds to call Princess Bubblegum, requesting her to come over right away. The scene cuts back to when Shoko fell into the toxic waste. The pool ripples and a mutated Shoko, who now appears the same as the scary lady from Finn's dream, crawls out of the waste. She crawls out to the fields bordering the Candy Kingdom to a tiny tree sapling, remarking that she now has two arms from her transformation. She then dies at the base of the tree as the sun rises over her. She is left at the base of the tree, only to let the tree grow around her, as she soon ends up in the floorboards of Finn and Jake's tree house. 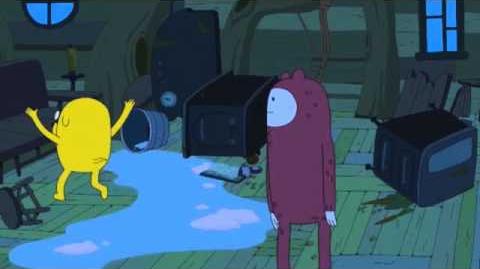 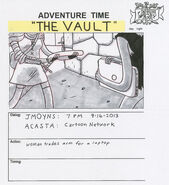 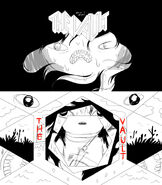 "We have to find out who that lady is!"

Shoko, the One Armed Thief

Early Banana Guard, standing watch while the Candy Castle is under construction

Princess Bubblegum, in the early years of the Kingdom

The Candy Kingdom, under construction

Filling up toxic waste with candy - a thankless job, but somebody's gotta do it.

Creation of the Gumball Guardians

This is what a bath in a toxic river can do to you.

The seed of things to come...?

Shoko drawing her last breaths at the future treehouse (and the mountains that would become the Ice Kingdom in the background).

The present treehouse and the Ice Kingdom now in the background.

A thumbs up from beyond the grave.