Adam Muto
Rebecca Sugar
"The Real You" is the fifteenth episode in the second season of Adventure Time. It's the forty-first episode overall.

Finn, who has to give a speech at Princess Bubblegum's science barbecue, seeks a quick fix to make himself smarter. However, he does so by getting a pair of glasses with very strange effects.

Finn and Jake are headed to the Candy Kingdom castle, where Princess Bubblegum is holding her science barbecue. They're carrying a gift Finn made for her: a scale model of the Candy Kingdom made from his own spit bubbles. Jake teases that Finn wants to trade spit with Princess Bubblegum, which embarrasses him. Outside her castle, Princess Bubblegum is setting up a stage and lighting the grill with Flambo. Finn presents his gift to her, but when she closes her eyes, she sneezes, popping the bubble sculpture. However, Princess Bubblegum thinks the pink tray it was on is actually the gift and gladly accepts it. Chet and Peppermint Butler get into an argument over who will get to be grillmeister, and accidentally knock over the grill. Finn jumps in to save the day, putting out the fire by stabbing some meat and throwing it over the flame. Impressed by his heroic actions, the princess asks him to be a speaker at her barbecue.

Finn fears that he is not smart enough to impress the princess, so he and Jake go to the library to get smarter. After trying to read books about figs and pigs, they quickly grow bored and distracted and start dancing and hollering, which causes Turtle Princess to kick them out. They then seek out Pupil Worms who run a Worm College in an old rotten apple. Finn and Jake try to sneak into a worm class. Finn disguises his finger as a worm and gives the name of "Wormy McSquirmy." The teacher says he is on the list of students but he hasn't shown up for a single class, which makes the worms angry and starts a fight. After getting out of Academia, Jake suggests the easy way out: magic. They visit Choose Goose's magical shack, where he offers to give them the Glasses of Nerdicon in exchange for being entertained. Finn entertains him with a finger puppet dance, and puts on the glasses. Finn's old perception of reality is shattered, as he instantly becomes a genius and understands the nature of space and the universe.

At the barbecue, Finn presents the Bubble creator. He shows everyone a two dimensional bubble, telling them it casts a one dimensional shadow. He then presents a three dimensional bubble, telling them it casts a two dimensional shadow. And he finally shows them a fourth-dimensional bubble which resembles a tesseract, it cast a three dimensional shadow beyond comprehension, causing time and space to later collapse and become a black hole. Finn then tells Bubblegum that he got smart by putting on the glasses, which she asks to take them off because she needs the real Finn. She takes them off, and Finn sees the black hole. He goes to destroy it, but the Bubble creator flies toward him, and he stabs it, destroying it. But, it turns his sword into a fourth dimensional sword. He then gets an idea, and lets himself get sucked in. Once he is in, the black hole explodes, and Finn comes flying out with no sword. Bubblegum then sobs over his shoulder telling him that her barbecue turned into a fiasco, but everyone cheers. She then catches Finn's list he wrote down when he had the glasses on and learns that Finn intended to "Win the heart of the Princess." When confronted about this, Finn explains how he wrote all that when he wore the glasses. Bubblegum then kisses him on the cheek, which causes him to pant heavily, and faint. When Finn does that, Bubblegum starts to giggle. 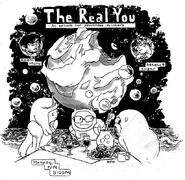 Rebecca Sugar's promotional art for the episode, a reference to the '90s film Mindwalk

BBQ Stage, before being sucked in the black hole

The library, where Finn and Jake annoy Turtle Princess.

A zoomed-out look of the library. 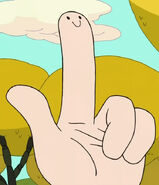 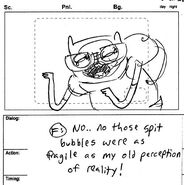