The Prince Who Wanted Everything

The Prince Who Wanted Everything

Bert Youn[1]
Kent Osborne
Adam Muto
Emily Partridge
"The Prince Who Wanted Everything" is the ninth episode in the sixth season of Adventure Time. It's the one hundred and sixty-fifth episode overall.

The episode begins with Ice King waking up a in forest, tied to a tree. He looks around calling out for Gunter. A campfire starts and LSP comes out of a bush to greet Ice King. She tells him the truth about himself (to which he claims he knows) and proceeds to show him a book she wrote about her gender-bent self, Lumpy Space Prince. The book is named "The Prince Who Wanted Everything." LSP asks him to read the book because he's Fionna and Cake's (and all the other residents in Aaa) "dad"/creator. Ice King then starts to read the book aloud.

The story begins with Lumpy Space Prince telling his servants to bring gold plated sandwiches by the window so he can feed his people. (LSP interrupts the story to tell Ice King to read in a "better voice.") He is then called over by his parents, who are monsters, to tell him to eat some worms and sharpen his teeth. When LSP refuses to do so, his parents grew mad and chased him out the castle to the edge of Lumpy Space. He falls into the portal to Aaa. Upon exiting, he sees animals introduces himself as the refugee prince of Lumpy Space. He then ask them to bring him "freaky" clothes, a "mind-blowing" book and servants, they proceed to do so. Shortly after, we see that the animals brought him Flame Prince, Turtle prince, Marshall Lee and Prince Gumball in shackles, some armor and a book. Soon, Fionna and Cake come and rescue the slaves. LSP is fascinated by Fionna and asks him if he likes her clothes, to which she replies that she doesn't care about them(where LSP once again interrupts the story to tell, Ice King to repeat what Fionna said, but in a nicer way). Lumpy Space Prince is happy to find someone who doesn't care about appearances and after commanding the animals to dress him in the "fashion of this peasant," decides to follow them back to the Tree Fort.

There, LSP studies Fionna and Cake's movements and explains how his parents only wanted him to move like a monster. He then asks Fionna to dance with, which she does, but she soon becomes entranced by his "handsome spell" and pushes her away, explaining that he can only be with someone "who is his equal in every way," whom we can assume he is speaking about Lumpy Space Princess. Fionna replies that she doesn't care and asks if anyone wants a sandwich. LSP then follows Fionna and Cake inside the Tree Fort and is amazed by how humble it looks. They give him a sandwich and he asks for a baby table. He sees how they eat their sandwiches without dipping them in gold and tries it himself. He is impressed by the "self-reliant sandwich." He then bursts out in song and a bird carries him to many places that eventually end up leading to the Tree Fort.

Suddenly a portal opens in the sky and his parents appear. Furious, Fionna rides on LSP to attack his parents with her sword. After knocking Fionna down, LSP's parents stab him and tells him to become a monster, to which he once again refuses and is knocked down. LSP tells Fionna that it's the end for him and asks if he made her proud, and once again she replies that she doesn't care. LSP then figures out that to beat his parents, he had to simply not care. Fionna converts her sword into a microphone and LSP shouts "I don't care!" out loud, his parents emit black smoke to try to attack him but he clears the smoke by shouting again "I don't care!" out loud curing them of their monster form. While they thank him for curing them from their monster form, he shouts "I don't care" again. They burst into bits of lump and he may have killed them. He then drops the microphone and tells Fionna and Cake, who are under his handsome spell, to buy him dinner as they float to the sunset.

(Back in the land of Ooo) The story continues with Ice King reading that LSP's story becomes real, and Lumpy Space Prince is able to create a portal to Ooo in ten seconds to meet his one true love. Then a nearby bush shakes. LSP and Ice King then look at each other and he begins to countdown from 10 as LSP floats over to the bush, hoping Lumpy Space Prince would come out and kiss her. Instead, a possum comes out, scares off LSP and runs up Ice King's robe. 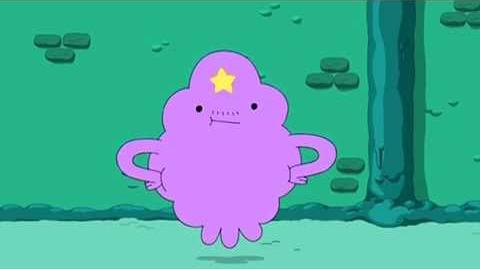 All You Need I Adventure Time I Cartoon Network